The Lost Gate: Mithermages, Book 1 by Orson Scott Card, narrated by Stefan Rudnicki, starts a new modern fantasy for bestselling author Card. Rudnicki as always delivers, and Card’s setting, on which he’s worked quite a while (as he detailed in an interview with The Geek’s Guide to the Galaxy), is reminiscent of Neil Gaiman’s American Gods in that it incorporates most every known pantheon into a modern narrative, whereas Danny is a very, very Ender-esque character. The audiobook is my pick for the best new science fiction and fantasy release of January 2011 at Audible.com. 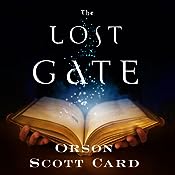 Danny North knew from early childhood that his family was different – and that he was different from them. While his cousins were learning how to create the things that commoners called fairies, ghosts, golems, trolls, werewolves, and other such miracles that were the heritage of the North family, Danny worried that he would never show a talent, never form an “outself”.

He grew up in the rambling old house, filled with dozens of cousins and aunts and uncles, all ruled by his father. Their home was isolated in the mountains of western Virginia, far from town, far from schools, far from other people.

There are many secrets in the House, and many rules that Danny must follow. There is a secret library with only a few dozen books, and none of them in English – but Danny and his cousins are expected to become fluent in the language of the books. While Danny’s cousins are free to create magic whenever they like, they must never do it where outsiders might see.

Unfortunately, there are some secrets kept from Danny as well. And that will lead to disaster for the North family.

More from Bull Spec reviewer Patrick Ward: “The Lost Gate is urban fantasy and classical mythology in its best, most grounded form, and Card has once again proven that he is one of the world’s most powerful Storyfathers.”