With front cover praise from David Drake (“Southern Gods is scary, smart, and effective both as Lovecraftian fiction and as a Southern Regional novel set in 1951”) and a recent “Big Idea” feature on Scalzi’s Whatever blog, Southern Gods is John Hornor Jacobs’s debut novel from Night Shade Books. Out in print late last month, Brilliance Audio has produced an Eric G Dove narration of the novel which is out today.

It’s not showing up in the Sci-Fi and Fantasy section (it’s slotted into Fiction/Horror), which, well, whatever, OK. Also out today:

And added yesterday, both an anticipated non-fiction title (Ghost in the Wires: My Adventures as the World’s Most Wanted Hacker by Kevin Mitnick and William L. Simon narrated by Ray Porter) and and anthology: The Year’s Top Ten Tales of Science Fiction 3 which collects short stories by Damien Broderick, Yoon Ha Lee, Ian R MacLeod, Sean McMullen, Allen M Steele, Robert Reed, and Peter Watts and is narrated by Tom Dheere, Nicola Barber, and Kate Baker: 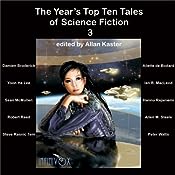 I’ve heard Kate Baker’s reading of “The Things” and the others are a list of some of the stories I’ve been looking forward to hearing for a long time — particularly Rajaniemi’s Elegy for a Young Elk, the Aliete de Bodard story, the Yoon Ha Lee story, … OK, OK. All of them.