Published by Orbit on April 1 earlier this year, Equations of Life by Simon Morden has just been added to Audible.com courtesy a Recorded Books production, narrated by Toby Leonard Moore: 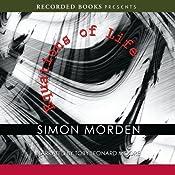 If this cover doesn’t look familiar, well, the book cover looks like this:

And the trilogy continued in May and June:

Anyway, I was intrigued by the book description way back when:

Samuil Petrovitch is a survivor. He survived the nuclear fallout in St. Petersburg and hid in the London Metrozone – the last city in England. He’s lived this long because he’s a man of rules and logic. For example: GETTING INVOLVED = A BAD IDEA.

But when he stumbles into a kidnapping in progress, he acts without even thinking. Before he can stop himself, he’s saved the daughter of the most dangerous man in London. And clearly: SAVING THE GIRL = GETTING INVOLVED.

Now, the equation of Petrovitch’s life is looking increasingly complex:

The audiobook sample audio certainly sounds well done, and am hoping to pick up the first book in audio when I get a chance.