Well, it’s Wednesday September 14, and Wednesdays tend to see some “odd” titles filter in after the “big new releases” on Tuesdays. Today is no exception, with a major new audiobook along with with three medium-length titles which all look pretty interesting.

The one I’ve been waiting for is Moxyland By Lauren Beukes Narrated by Nico Evers-Swindell. It’s the first of Beukes’s books to come to audio, with her award-winning Zoo City slated to come soon as well, again from “Angry Robot on Brilliance Audio” — a partnership I hope continues for many, many titles. 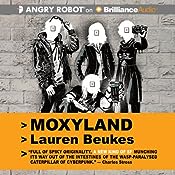 It’s a short to medium listen at a shade under 8 hours, described as: “What’s really going on? Who’s really in charge? You have NO. F***KING. IDEA. In the near future, an art-school dropout, an AIDS baby, a tech-activist, and an RPG-obsessed blogger live in a world where your online identity is at least as important as your physical one. Getting disconnected is a punishment worse than imprisonment, but someone’s got to stand up to Government Inc. – whatever the cost.”

The other three I want to mention are:

Whew. Well, now that September is about half over, maybe it’s time for me to finally post my September “preview” …