In a busy day, particularly for books for young readers, it is the Hachette Audio young adult titleDaughter of Smoke and Bone by Laini Taylor which most strongly grabs my attention. Narrated by Khristine Hvam, the book comes with a pedigree of starred reviews, as from Publishers Weekly: “National Book Award finalist Taylor again weaves a masterful mix of reality and fantasy with cross-genre appeal. Exquisitely written and beautifully paced, the tale is set in ghostly, romantic Prague, where 17-year-old Karou is an art student—except when she is called “home” to do errands for the family of loving, albeit inhuman, creatures who raised her.” 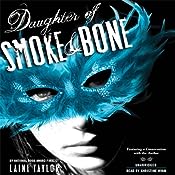 More praise from Amazon Best Books of the Month, September 2011:

Karou is a seventeen-year-old art student with a most unusual family. From his desk in a dusty, otherworldly shop, her mysterious, monstrous father sends her on errands across the globe, collecting teeth for a shadowy purpose. On one such errand, Karou encounters an angel, and soon the mysteries of her life and her family are unraveled—with consequences both beautiful and dreadful. National Book Award finalist Laini Taylor has created a lushly imaginative, fully realized world in Daughter of Smoke and Bone. Taylor’s writing is as sumptuous as poetry, and the story overflows with dark and delightful magic, star-crossed love, and difficult choices with heartbreaking repercussions. Readers of all ages will be utterly enchanted. —Juliet Disparte

Meanwhile, it’s also a good day for collections and young readers, though, once again, no sign of Neal Stephenson’s Reamde. So, I turned to Brilliance Audio’s Kelsey Turek for news, and found that the audiobook is indeed delayed, as of now scheduled for 2011-10-18.

Once upon a time, Hazel and Jack were best friends. But that was before he stopped talking to her and disappeared into a forest with a mysterious woman made of ice. Now it’s up to Hazel to go in after him. Inspired by Hans Christian Andersen’s “The Snow Queen,” Breadcrumbs is a story of the struggle to hold on, and the things we leave behind.”