Audible.com added yesterday: The Hum and the Shiver by Alex Bledsoe

The Hum and the Shiver: The Tufa Novels, Book 1 By Alex Bledsoe was published in print by Tor Books on September 27. Yesterday, the Blackstone Audio audiobook was added to Audible.com, narrated by Emily Janice Card and Stefan Rudnicki. When I saw it yesterday: 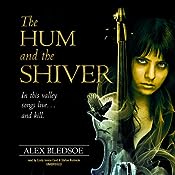 I didn’t recognize the book as actually being one of those on my anticipated titles list, as the cover … well, compare it to the Tor print cover:

But seeing Rudnicki’s name attached (though the available audio sample is entirely from Card) kept some wheels turning, and I eventually put 2+2 together. Having recently listened to John Hornor Jacobs’s Southern Gods, my appetite for Southern and Appalachian fantasy is craving a little more, and the stolidly Tennessean Bledsoe’s novel looks to do just that:

No one knows where the Tufa came from or how they ended up in the mountains of east Tennessee. When the first Europeans came to the Smoky Mountains, the Tufa were already there. Dark-haired and enigmatic, they live quietly in the hills and valleys of Cloud County, their origins lost to history. But there are clues in their music, hidden in the songs they have passed down for generations.

Private Bronwyn Hyatt, a true daughter of the Tufa, has returned from Iraq, wounded in body and spirit, but her troubles are far from over. Cryptic omens warn of impending tragedy, while a restless ”haint” has followed her home from the war. Worse yet, Bronwyn has lost touch with herself and with the music that was once a part of her life. With death stalking her family, will she ever again join in the song of her people and let it lift her onto the night winds?

I just spent some time in the NC “high country” near Boone and Blowing Rock, NC, and the area west (and up!) from there is even more cloaked in mist and forgotten rocks and dark earth. I’m hoping to find the time to sneak this audiobook in before October gets going — less compelling cover art or not. It will make my next trip to the western NC mountains, further and higher and more remote, all the more interesting.