On the heels of the Del Rey hardcover release yesterday comes The Cold Commands: A Land Fit for Heroes, Book 2 By Richard K. Morgan Narrated by Simon Vance: 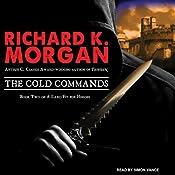 Out from Tantor Audio, The Cold Commands continues Morgan’s foray into sword & sorcery which began with 2009’s The Steel Remains. Morgan is best known for The Takeshi Kovacs Trilogy: Altered Carbon, Broken Angels & Woken Furies but his new series has been greeted with good reviews and the sequel has been quite anticipated. If the cover doesn’t look quite familiar, here’s the book cover:

And here’s a review from Tor.com: “A Hard But Worthy Read”: “The complex thematic arguments about religion, society, sexuality, morality and what becomes necessary for survival that underlie the book make its adventure-and-intrigue plots emotionally engaging, the world-building is absolutely genius, and the characters are gripping. The Cold Commands does what a second book should do: resolves a conflict of its own while opening up a greater, much more dangerous challenge for the next book.” 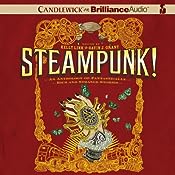 From Brilliance Audio: ”Imagine an alternate universe where romance and technology reign. Where tinkerers and dreamers craft and recraft a world of automatons, ornate clockworks, calculating machines, and other marvels that never were. Where scientists and schoolgirls, fair folk and Romans, intergalactic bandits, Utopian revolutionaries, and intrepid orphans — decked out in corsets, clockwerk suits, and tall black boots — solve dastardly crimes, escape from monstrous predicaments, consult oracles, and hover over volcanoes in steam-powered airships. Here, in the first major steampunk anthology for young adults, fourteen masters of speculative fiction, including two graphic storytellers, embrace the genre’s established blend of sci-fi and fantasy, action and adventure, history and romance, and refashion it in surprising ways and in settings as diverse as Canada, New Zealand, Appalachia, Wales, ancient Rome, future Australia, and alternate California. Visionaries Link and Grant have invited all-new interpretations, explorations, and expansions, taking a genre already rich, strange, and inventive in the extreme and challenging contributors to remake it from the ground up. The result is an anthology that defies even as it defines the genre. With fantastically strange stories by M. T. Anderson, Holly Black, Libba Bray, Shawn Cheng, Cassandra Clare, Cory Doctorow, Dylan Horrocks, Kathleen Jennings, Elizabeth Knox, Kelly Link, Garth Nix, Christopher Rowe, Delia Sherman, and Ysabeau S. Wilce.”

A late addition to yesterday’s lineup is the long (long!) anticipated The Children of the Sky By Vernor Vinge Narrated by Oliver Wyman From Macmillan Audio — “After nearly twenty years, Vernor Vinge has produced an enthralling sequel to his memorable best-selling novel A Fire Upon the Deep.” 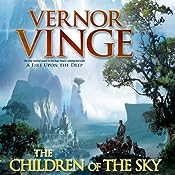