Audiobook release day: On the Beach by Nevil Shute!

On the Beach is Nevil Shute’s 1957 masterpiece, a defining work of speculative fiction born of its time in the cold war, where global nuclear annihilation seemed a turnkey away. Narrated by Simon Prebble From Recorded Books, this appears to be the stellar 1991 production, now made available at Audible.com: 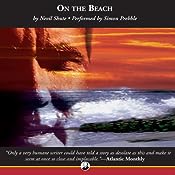 At 9.5 hours, it’s not a long listen. But this novel, along with Walter M. Miller’s 1959 novel of nuclear cataclysm A Canticle for Leibowitz, are among by all-time favorite books. Shute’s is by far the more accessible, both in its time and to modern readers, and it’s a novel I can thank my wife for recommending to me some years ago and which has never been far from memory. There is a 2010 AudioGO Ltd. production of a BBC Audiobooks of a James Smillie narration already available at Audible, so there’s now a choice of narrators available.

The publisher’s description is apt:

A war no one fully understands has devastated the planet with radioactive fallout from massive cobalt bombing. Melbourne, Australia, is the only area whose citizens have not yet succumbed to the contamination. But there isn’t much time left, a few months, maybe more—and the citizens of Melbourne must decide how they will live the remaining weeks of their lives, and how they will face a hopeless future.

Published in 1957, On the Beach is considered a classic nuclear holocaust novel, and a masterpiece of speculative fiction.

And here’s the book cover I remember, from the 1957 Scholastic paperback:

So, that out of the way, there’s also a pair of Isaac Asimov novels out today, on the heels of yesterday’s new edition of Foundation’s Edge. Both are again new productions from Random House Audio but instead of Scott Brick, these are both narrated by Larry McKeever: Forward the Foundation and Foundation and Earth.