Billed (perhaps justifiably) as “The Most Anticipated Novel of the Year”, 1Q84 by Haruki Murakami has finally arrived. Translated by Jay Rubin and Philip Gabriel, narrated by Mark Boyett, Marc Vietor, and Allison Hiroto, and out from Audible, Inc.: 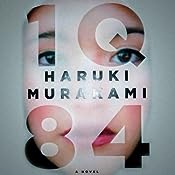 The book has been subject to quite a flurry of interviews, reviews, and other oddities. Oddities? Yes. TIME magazine’s “Cat Power” article, which rates Murakami’s books on their cat content, would apply. But more typical profiles and reviews have abounded as well, from the NY Times’s “The Fierce Imagination of Haruki Murakami” to Vanity Fair, Salon.com, and NPR, to being Amazon.com’s choice as its Spotlight Selection in its October Books of the Month. Heck, even the cover design has its own story.

In a nutshell, Audible.com describes it as: “Haruki Murakami takes us back to 1984. This time, instead of London, we’re in dystopian Tokyo, where the life of an impressionable young woman, Aomame, intertwines with an aspiring writer named Tengo. Mysterious, romantic, fantastical, this is Murakami’s masterpiece.”

While an introduction seems a bit absurd: Murakami is the author of (among others) Kafka on the Shore, The Wind-Up Bird Chronicle, and Hard-boiled Wonderland and the End of the World. If there’s not quite enough of a fix available for you, Audible.com has even been offering a Free Short Story: The Elephant Vanishes.

Another big announcement today is the launch of new audiobook imprint Neil Gaiman Presents. With an excellent and varied crop of selections, some cast via Audible’s Audiobook Creation Exchange (ACX), Gaiman goes a step further than the more “informally” presented productions of Fritz Lieber’s Fffrd stories to create a new brand, with:

Just: Wow. Light and Pavane are impressive openings for Gaiman, and anyone who can get more great, imaginative books into audio gets a thumbs up from me. Well done and good luck, Mr. Gaiman. And if you want some suggestions…