Audiobook release day: The Folded World by Catherynne M. Valente (and many more)

On a busy day to start November, my most-anticipated title is without question The Folded World: A Dirge for Prester John Volume Two By Catherynne M. Valente Narrated by Ralph Lister: 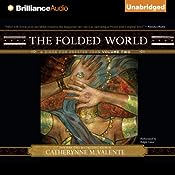 Book 2 in her A Dirge for Prester John series after 2010’s The Habitation of the Blessed — also narrated by Lister and out from Brilliance Audio. In book 2, “Mythopoeic Award winner Catherynne M. Valente continues to re-imagine the legends of the Middle Ages” and we’ll see the armies of Prester John come to Constantinople’s aid in Jerusalem. Count me in.