Audiobook release day: The Cloud Roads by Martha Wells and The Dragon’s Path by Daniel Abraham

The Cloud Roads By Martha Wells Narrated by Christopher Kipiniak From Audible Frontiers: 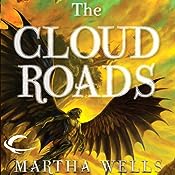 This is a book I picked up earlier this summer at my local library when doing a little cover browsing of new hardcovers. (Along with Greg Egan’s The Clockwork Rocket and Col Buchanan’s Farlander — quite a haul!) I read the opening, found it interesting, and marked it as one to look for in audio. And here it is: “Moon has spent his life hiding what he is – a shape-shifter able to transform himself into a winged creature of flight. An orphan with only vague memories of his own kind, Moon tries to fit in among the tribes of his river valley, with mixed success. Just as Moon is once again cast out by his adopted tribe, he discovers a shape-shifter like himself… someone who seems to know exactly what he is, who promises that Moon will be welcomed into his community. What this stranger doesn’t tell Moon is that his presence will tip the balance of power… that his extraordinary lineage is crucial to the colony’s survival… and that his people face extinction at the hands of the dreaded Fell! Now Moon must overcome a lifetime of conditioning in order to save himself – and his newfound kin.”