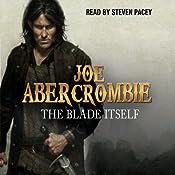 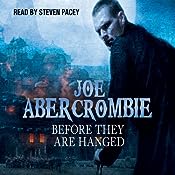 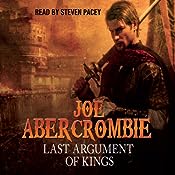 HOW: Bought a-la-carte from Audible.com.

WHY: Over the years, some books just keep popping up. In writing back and forth with Pyr editor Lou Anders over the past couple of years, two names kept coming up when we’d write about what Pyr books might most interest me: Joe Abercrombie and James Enge. Then, when I profiled and interviewed Lou for Bull Spec #4, the same two books came up in conversation with TIME books editor Lev Grossman. Well, I decided to start with Abercrombie for a few reasons:

THE STORY: I’m going to tackle this a bit piecemeal. Who: Logen Ninefingers is a legendary fighter from the North, stranded alone in a frigid wilderness after an ambush; Sand dan Glokta is a former champion swordsman and army colonel, crippled and disfigured by torture and now an Inquisitor — holding the scalpel and pliers himself; and Jezal dan Luthar is a rudderless minor noble’s son, training for the same chapmionship previously won by Glokta. And Bayaz, the First of the Magi. And Ferro Maljinn, an ex-slave bent on revenge. And Dogman, one of Logen’s men. And Collem West, friend to both Glokta and Jezal. Where: The Northmen have been gathered by Bethod, a brutal man for whom Logen once served as champion. The Gurkish Empire in the south, in whose prisons Glokta was tortured, and where Ferro was enslaved. And in the middle, the Union, ruled in all but name by its closed council. What: In a building, converging plot full of beautiful symmetries, with story arcs dancing and combining and returning in echoes, Abercrombie moves pieces to and fro, smashes them together, building intrigue both political and military. Armies go to war and bodies hit the floor, both en masse on the battlefield and in close quarters in darkened city alleys and collapsing abandoned buildings. Magic, though rare, is unbelievable in its power when it happens. It’s a gritty, violent world, but there is morality, and soul-searching, and violence has its price. It’s a well-plotted, barbaric romp of swords and magic that doesn’t fall prey to the skewering laser beam of Pratchett’s Discworld. It’s well worth enjoying.

THE NARRATION: A masterwork throughout. Pacey’s characterization of Glokta stands as one of the most memorable I’ve encountered, up there with Oliver Wyman’s Heretic from Jeff VanderMeer’s Finch and Roy Dotrice’s Tyrion from George R. R. Martin’s A Game of Thrones. Pacey’s Bayaz and Ferro were also well done.

THE VERDICT: Wonderful books, wonderfully narrated. It’s the new sword and sorcery, an updated injection of Howard’s Conan into the sprawling worlds of multi-character epic fantasy developed over the past 30 years. I loved it.