Award-winning Canadian science fiction author Robert J. Sawyer is not just the author of a long list of audiobooks (from FlashForward, from which the recent television series was adapted, to his Neanderthal Parallax series Hominids, Humans, and Hybrids, to his most recent series, WWW: Wake, Watch, and Wonder, and several standalone novels besides) he’s also a great fan of audiobooks and of Audible.com, having been a member for over ten years. He’s also narrated several introduction to classic science fiction audiobooks, which is where I first heard his voice. The first story of his I “read” also came via audiobook, that being his excellent short story “You See, But You Do Not Observe” in the John Joseph Adams-edited anthology The Improbable Adventures of Sherlock Holmes, and since then I’ve also enjoyed his WWW series: Recently, Sawyer announced that four more of his novels would be coming to audiobook:

Combining this announcement with the knowledge that his next novel, Triggers, was coming soon, I wrote Sawyer and asked him about the audiobook announcement, his favorite audiobooks, and more.

Q: What can you tell us about the new audiobook deal?

I love my relationship with Audible.com. I’m thrilled that they’ve just bought five more audiobooks from me: my new novel Triggers, which will be out simultaneously with the hardcover on April 3, 2012, plus four more backlist titles: Illegal Alien, Frameshift, Factoring Humanity, and Mindscan. They’re going to have all of these backlist titles out for April, as well. At that point they’ll have 16 of my 21 novels as audiobooks; the only ones not yet in the queue are my first five novels, originally published in print between 1990 and 1994.

Q: At the same time, some of the previously Audible-only audiobooks such as Hominids and Humans are coming to “real/physical” audiobooks very shortly from Brilliance Audio — as Amazon now owns both Brilliance and Audible that seems to be a pretty common thing lately.

Yes, and that’s terrific! Although I myself use Audible for my own audiobook-listening pleasure, I know lots of people still prefer physical media. I’m thrilled that Brilliance is doing all of the editions.

Q: I’ve enjoyed your narrated introductions for a few audiobooks of classic sf. How did that come about and how did you record the introductions?

Audible has very kindly asked me to do introductions to some of the all-time classic SF novels, and I’ve been thrilled to have that opportunity. I’ve written and narrated introductions for them to By Arthur C. Clarke’s Childhood’s End and Rendezvous with Rama, and Frederik Pohl’s Man Plus and Gateway. Since Clarke is my all-time favorite science-fiction author and Gateway is, I think, the finest science-fiction novel anyone has ever written, I was delighted to be asked to do that. I have a studio quality microphone and go sit in a little makeshift studio in a closet in my home and record the intros, with my wife Carolyn acting as audio engineer; she’s the one who does the editing of the files (normally in Sony Sound Forge Audio Studio) before we send them to Audible. 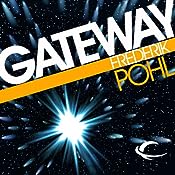 Q: On Triggers—though it’s maybe a bit early and I don’t know anything about it, can you tell me a bit about Triggers, coming in both print and audio in April 2012?

I got a huge new audience for my books because of the FlashForward TV series, based on my novel of the same name (which, of course, is also available as an audiobook). In some ways, that series was very much typical Robert J. Sawyer—with a lot of philosophical musing and big ideas. But the producers wrapped that up in a thriller package with conspiracies and federal agents. I thought it would be prudent to offer a novel that would appeal to that new audience without alienating my traditional readers, and so I crafted Triggers. The main character is a female Secret Service agent dealing with an attempted assassination of the US president, and the discovery that someone whose identity is a mystery can read the president’s memories.

Q: What are some of your favorite audiobooks? I saw that you’ve been an Audible member for 10 years (so have I—May 2001, I wonder whose account is older?) and I’m sure you’ve got a few that really stand out.

I gotta say, in all honesty, the best-produced audiobooks I’ve seen happen to be the Audible Frontiers productions of my novels Wake, Watch, and Wonder; the Watch adaptation was an Audie Award finalist in 2011. They used a different narrator for each point of view character. For my money, Jessica Almasy is Caitlin Decter, and I liked Marc Vietor’s work as Webmind in the production of Wake so much, that when I subsequently wrote the novel Wonder, I made Webmind choose the voice of “well-known audiobook narrator Marc Vietor” as his official voice.

But in terms of books by other people, the audiobook of The Time Traveler’s Wife by Audrey Niffenegger is fantastic, with two excellent alternating narrators, one male (William Hope) and one female (Laurel Lefkow). John Cleese’s reading of C.S. Lewis’s The Screwtape Letters is amazing. I really enjoyed Robert Harris’s Pompeii, and especially given the current economic situation, everyone should listen to Nickel and Dimed: On (Not) Getting By in America by Barbara Ehrenreich.

My current listens are Elliot Gould narrating Raymond Chandler’s Farewell, My Lovely and Bill Clinton reading his own book, Back to Work. This entry was posted in regular and tagged interviews, robert j sawyer. Bookmark the permalink.