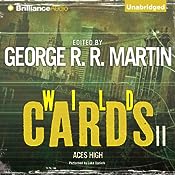 This volume follows a more unified story arc, as The Swarm-Mother infestation approaches Earth, making for a more novel-like feel as opposed to a shared world short story anthology as in the first volume. Daniels does an excellent job on both volumes (so far?), with his Doctor Tachyon and (perhaps even more excellent) Jubil characterizations being both memorable and well done. The first volume had more in terms of socially relevant science fiction, this volume turns up the adventure and “save the world!” stakes a bit. I really do hope Brilliance (and Daniels!) takes on the third volume.

Out yesterday, Eutopia: A Novel of Terrible Optimism By David Nickle Narrated by Oliver Wyman for Audible Inc. is one of the ChiZine titles I’ve been looking forward to. Dark deals with creatures, a eugenics-based utopia in northern Idaho in the early 20th century, narrator Wyman liked it and it definitely looks intriguing: OUT PREVIOUSLY THIS WEEK:
MISSING IN ACTION:

This entry was posted in regular and tagged release-tuesday, wild-cards. Bookmark the permalink.