Velvet Dogma By Weston Ochse is a 2011 novel billed as “Philip K. Dick meets William Gibson.” Narrated by Arika Escalona for Crossroad Press, it is set in the year 2040 in a world of human-machine ocular nerve interaction and sanctioned organ theft, with paroled cyberterrorist Rebecca Mines on the run: 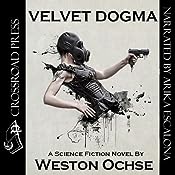