Listening to Kevin Hearne’s Hounded: The Iron Druid Chronicles, Book 1 this weekend two things struck me. First, that narrator Luke Daniels, whom I enjoyed on the first two volumes of the Wild Cards series and have spotted as the voice behind a Red Bull radio spot, really is darn near a soundalike for Nick Podehl, the voice of Patrick Rothfuss’s KingKiller Chronicles. (Side note: Hounded and The Name of the Wind are both on sale for $4.95 right now.)

Second, and the reason for this post, is that one of the characters of Hounded is Oberon, a sausage and tummy rub focused Irish wolfhound who the eponymous Iron Druid has taught to speak telepathically, and that both Hearne’s and Daniels’s characterizations are very enjoyable. This led me to try to remember some memorable dogs in recent sf/f audiobooks, and I came up close to empty — Carl from John Scalzi’s Fuzzy Nation, read by Wil Wheaton, being another memorable dog which immediately came to mind, and he made do without benefit of telepathy! 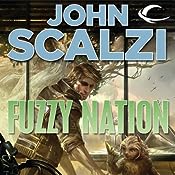 A cursory search turned up high marks for the Disreputable Dog in Garth Nix’s Lirael: Daughter of the Clayr, read by Tim Curry, but I’m not personally familiar with that series, and so I decided to simply ask the question: what are some good science fiction and fantasy books, preferably in audio, that feature memorable dogs?

(Going a bit further afield to wolves, such as the direwolves in George R. R. Martin’s Song of Ice and Fire series seems fair play, but let’s leave the werewolves out of the discussion, shall we?)

This entry was posted in regular and tagged questions. Bookmark the permalink.