March 1 brings with it two much-anticipated audiobooks, though also sees the print publication of a few books I’d love to see/hear in audio.

First up among those anticipated audiobooks is The Rook: A Novel By Daniel O’Malley, Narrated by Susan Duerden for Hachette Audio (Dreamscape) — O’Malley’s debut was published in hardcover and e-book by Little, Brown and Company on January 11, and it was on both my radar and my “where’s the audio?” list, put onto the former by TIME magazine book editor (and author of The Magicians) Lev Grossman in his article ”7 Books I’m Looking Forward to in 2012”: “Utterly convincing and engrossing – totally thought-through and frequently hilarious. The writing is confident and fully fledged. Even this aging, jaded, attention-deficit-disordered critic was blown away.” Read by Susan Duerden for Dreamscape, the audiobook for The Rook comes in at TKTK hours: “‘The body you are wearing used to be mine.’ So begins the letter Myfanwy Thomas is holding when she awakes in a London park surrounded by bodies wearing latex gloves.” Narrator Duerden I recognize from her work on China Mieville’s Embassytown, and I’m very much looking forward to picking this one up this month. 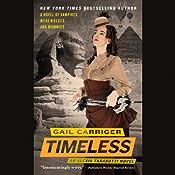 The other is Timeless: The Parasol Protectorate, the Fifth By Gail Carriger, Narrated by Emily Gray for Hachette Audio — Series: Parasol Protectorate, Book 5 — “Alexia Tarabotti, Lady Maccon, has settled into domestic bliss. Of course, being Alexia, such bliss involves integrating werewolves into London High society, living in a vampire’s second best closet, and coping with a precocious toddler who is prone to turning supernatural willy-nilly. Even Ivy Tunstell’s acting troupe’s latest play, disastrous to say the least, cannot put a damper on Alexia’s enjoyment of her new London lifestyle. Until, that is, she receives a summons from Alexandria that cannot be ignored.” I haven’t taken the dive into Carriger’s Parasol Protectorate series, and so don’t know when I’ll be catching up to book 5. Someday…