May goes out fairly quietly in terms of raw numbers, but there are still two audiobooks I am pretty excited about, led for me by No Going Back: Jon & Lobo, Book 5 By Mark L. Van Name, Narrated by Tom Stechschulte for Audible Frontiers. Out concurrently with its print and e-book release from Baen, the book continues the Jon and Lobo series, which came to audio in one giant gulp last month. “Jon and Lobo are back–and everything is about to change. If they both survive. Haunted by memories of children he could not save, Jon Moore is so increasingly self-destructive that even his best friend, the hyper-intelligent Predator-Class Assault Vehicle, Lobo, is worried. When Jon risks meeting a woman from his distant past and undertakes a high-stakes mission, Lobo fears this will be their last. The job is illegal. They have to take on one of the oldest, most powerful men alive. Two different security forces are tracking them. And Jon is falling in love. Desperate and out of options on a world so inhospitable that its statues and monuments outnumber its living inhabitants, Jon and Lobo encounter their deadliest challenges yet. They must make decisions from which there truly is No Going Back.” 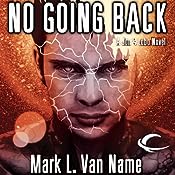 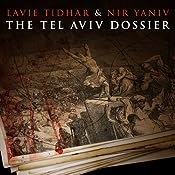 The second audiobook I’m most excited about this week is The Tel Aviv Dossier By Lavie Tidhar and Yir Yaniv, Narrated by Eric Meyers for Audible Ltd. Originally published in print by ChiZine in 2009, it’s the third of Tidhar’s books to come to audio after the mid-May release of his 2011 novel Osama and his novella An Occupation of Angels last year. Here’s the pitch for The Tel Aviv Dossier: “Through a city torn apart by violence they cannot comprehend, three disparate people: a documentary film-maker, a yeshiva student, and a psychotic fireman must try to survive, and try to find meaning – even if it means being lost themselves. As Tel Aviv is consumed, a strange mountain rises at the heart of the city and shows the outline of what may be another, alien world beyond. Can there be redemption there? Can the fevered rumours of a coming messiah be true? As the city loses contact with the outside world and closes in on itself, as the few surviving children play and scavenge in the ruins, can innocence survive? And is it possible for hope to spring amid such chaos?”

This entry was posted in regular, Release Week and tagged lavie tidhar, mark van name, no going back, release week. Bookmark the permalink.