The first release week of August packs a pretty big whallop, though it doesn’t bring a couple of the titles I was most looking forward to (Jim C. Hines’s Libriomancer and T. Aaron Payton’sThe Constantine Affliction— Payton is a new pseudonym for Steampunk from the brilliant Tim Pratt) it does bring an anticipated sequel, one of my “most missing audiobooks” from earlier in 2012, and two more interesting “genre in the mainstream” picks, along with a few new audiobooks of older Stephen King books, 6 books in CJ Cherryh’s Foreigner series, and a half-dozen more titles of interest out today and earlier this week.

That anticipated sequel is King of Thorns By Mark Lawrence, Narrated by James Clamp for Recorded Books. At 13 hrs and 30 mins, “The follow-up to Mark Lawrence’ s thrilling debut novel Prince of Thorns, King of Thorns continues the tale of antihero Jorg Ancrath. After wresting back control of his kingdom from those who murdered his family, Jorg sees the land erupt with hundreds of battles fought by lords and petty kings. More daunting still, he faces an enemy many times his own strength. Jorg may not be able to win this battle in a fair fight, but he wields a rage and cunning that just might even the odds.” 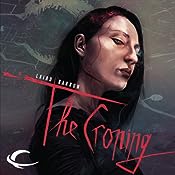 The Croning By Laird Barron was originally published earlier this year in print/ebook by Night Shade Books. Barron is a familiar name to those who follow the Shirley Jackson Award, where his short fiction (and collections of the same, and anthologies featuring the same) has often been nominated and selected as the award’s winner. (He’s also been nominated for the Bram Stoker, International Horror Guild, World Fantasy, and other awards.) The Croning is his debut novel, here narrated by Emily Zeller for Audible Frontiers. “Strange things exist on the periphery of our existence, haunting us from the darkness looming beyond our firelight. Black magic, weird cults, and worse things loom in the shadows. The Children of Old Leech have been with us from time immemorial. And they love us…. Donald Miller, geologist and academic, has walked along the edge of a chasm for most of his nearly 80 years, leading a charmed life between endearing absent-mindedness and sanity-shattering realization. Now, all things must converge. Donald will discover the dark secrets along the edges, unearthing savage truths about his wife Michelle, their adult twins, and all he knows and trusts. For Donald is about to stumble on the secret… of The Croning. From Laird Barron, Shirley Jackson Award-winning author of The Imago Sequence and Occultation, comes The Croning, a debut novel of cosmic horror.”

Some Remarks By Neal Stephenson, Narrated by Jeff Cummings for Harper Audio. “One of the most talented and creative authors working today, Neal Stephenson is renowned for his exceptional novels – works colossal in vision and mind-boggling in complexity. Exploring and blending a diversity of topics, including technology, economics, history, science, pop culture, and philosophy, his books are the products of a keen and adventurous intellect. Not surprisingly, Stephenson is regularly asked to contribute articles, lectures, and essays to numerous outlets, from major newspapers and cutting-edge magazines to college symposia. This remarkable collection brings together previously published short writings, both fiction and nonfiction, as well as a new essay (and an extremely short story) created specifically for this volume.” 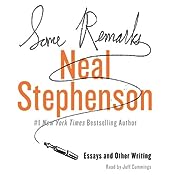 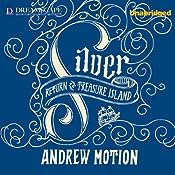 Silver: Return to Treasure Island By Andrew Motion, Narrated by David Tennant for Dreamscape Media.”In the eastern reaches of the Thames lies the Hispaniola, an inn kept by Jim Hawkins and his son. Late one night, a mysterious girl named Natty arrives on the river with a request for Jim from her father – Long John Silver. Aged and weak, but still possessing a strange power, the pirate proposes Jim and Natty sail to Treasure Island in search of Captain Flint’s hidden bounty. But the thrill of the ocean odyssey gives way to terror as the Nightingale reaches its destination, for it seems Treasure Island is not as uninhabited as it once was…. Silver is a worthy sequel to Treasure Island and a work of extraordinary authenticity and imaginative power from one of England’s greatest writers.” Motion is a Poet Laureate, and Tennant is quite well know as having played the titular doctor on Dr. Who.

Lastly, two genre-leaning titles from mainstream imprints, the first and more interesting to me being The Dog Stars By Peter Heller, Narrated by Mark Deakins for Random House Audio. “Hig survived the flu that killed everyone he knows. His wife is gone, his friends are dead, he lives in the hangar of a small abandoned airport with his dog, his only neighbor a gun-toting misanthrope. In his 1956 Cessna, Hig flies the perimeter of the airfield or sneaks off to the mountains to fish and to pretend that things are the way they used to be. But when a random transmission somehow beams through his radio, the voice ignites a hope deep inside him that a better life – something like his old life – exists beyond the airport.” 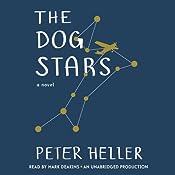 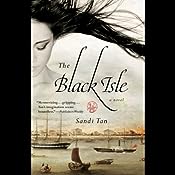 The other of the “genre in the mainstream” books is The Black Isle By Sandi Tan, Narrated by Sarah Zimmerman for Hachette Audio. It’s about twice as long as most of the (11-12 hour) audiobooks listend above at 21 hrs and 38 mins, but it’s been a while since I enjoyed a good long haunting, and I’ve recently quite enjoyably listened to Zimmerman narrate a longish title (Kim Stanley Robinson’s 2312). “There are ghosts on the Black Isle. Ghosts that no one can see. No one… except Cassandra. Uprooted from Shanghai with her father and twin brother, young Cassandra finds the Black Isle’s bustling, immigrant-filled seaport, swampy jungle, and grand rubber plantations a sharp contrast to the city of her childhood. And she soon makes another discovery: the Black Isle is swarming with ghosts. Haunted and lonely, Cassandra at first tries to ignore her ability to see the restless apparitions that drift down the street and crouch in cold corners at school. Yet despite her struggles with these spirits, Cassandra comes to love her troubled new home. And soon, she attracts the notice of a dangerously charismatic man. Even as she becomes a fearless young woman, the Isle’s dark forces won’t let her go. War is looming, and Cassandra wonders if her unique gift might be her beloved island’s only chance for salvation…. Taking listeners from the 1920s through the Japanese occupation during World War II, to the Isle’s radical transformation into a gleaming cosmopolitan city, The Black Isle is a sweeping epic – a deeply imagined, fiercely original tale from a vibrant new voice in fiction.”