While the release week for Tuesday August 14 is a bit quiet for concurrent new releases — again it’s the “Seen But Not Heard” list of Nick Mamatas’s Bullettime, collections from Kij Johnson and Jeffrey Ford, and some others which drive my thoughts on the week — there’s a sizable list of previously released books in audio for the first time, including a highly-anticipated sequel and a collection of stories by Joe Haldeman being the most intriguing audiobooks this week, with additional picks being Ken Scholes Psalms of Isaak series continuing with a switch in audiobook publisher, and an already-mentioned trilogy’s conclusion.

Just out this morning (Wednesday) is that much-anticipated sequel, Caliban’s War: The Expanse, Book 2 By James S. A. Corey, Narrated by Jefferson Mays for Recorded Books. At 19 hrs and 50 mins the second offering from the joint pseudonym of Daniel Abraham and Ty Franck is a shade longer than the series opener, 2011’s Leviathan Wakes. Caliban’s War was published earlier this year, and now that it’s in audio, listeners will get to hear Mays reprising his role as narrator, following “James Holden and his crew on the Rocinante” once again. 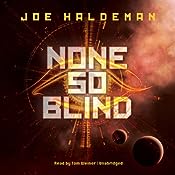 Out on Monday was None So Blind: A Short Story Collection By Joe Haldeman (1996) Narrated by Tom Weiner for Blackstone Audio — Length:9 hrs and 6 mins — “An award-winning visionary and true master of worlds and wonders, the man whom author David Brin calls “one of the best prophetic writers of our times”, once again demonstrates the breathtaking scope and startling power of his imagination, transporting listeners across space and time, into the heart of darkness and the soul of madness.”

Antiphon: The Psalms of Isaak, Book 3 By Ken Scholes, Narrated by Scott Brick, Gabrielle de Cuir, John Rubenstein, and Stefan Rudnicki for Audible Frontiers — Length:16 hrs and 35 mins — The first two audiobooks in this series were produced by Macmillan Audio, and it’s good to see this series continuing. Audible has brought back narrators Brick (books 1 and 2) and Rudnicki (book 1) for some high-end voice continuity as well. Here: “Nothing is as it seems to be. The ancient past is not dead. The hand of the Wizard Kings still reaches out to challenge the Androfrancine Order, to control the magick and technology that they sought to understand and claim for their own.” 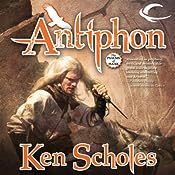 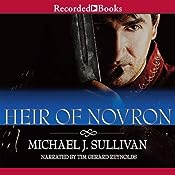