The second release week of September still shows no sign of Brandon Sanderson’s Legion, read by Oliver Wyman; but I’m sure it’s coming soon. Not that I’m hitting reload that often…

The Blinding Knife: Black Prism, Book 2 By Brent Weeks, Narrated by Simon Vance for Hachette Audio — Series: Lightbringer, Book 2 — Length: 23 hrs and 48 mins — I haven’t gotten to book one of this series yet, The Black Prism (narrated by Cristofer Jean) but have heard quite a lot of good things about both Lightbringer and Weeks’ previous series, the Night Angel Trilogy. Here: “Gavin Guile is dying. He’d thought he had five years left – now he has less than one. With 50,0000 refugees, a bastard son, and an ex-fiancée who may have learned his darkest secret, Gavin has problems on every side. All magic in the world is running wild and threatens to destroy the Seven Satrapies. Worst of all, the old gods are being reborn, and their army of color wights is unstoppable. The only salvation may be the brother whose freedom and life Gavin stole 16 years ago.” 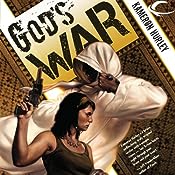 God’s War: Bel Dame Apocrypha, Book 1 By Kameron Hurley, Narrated by Emily Bauer for Audible Frontiers — Series: Bel Dame Apocrypha, Book 1 — Length: 12 hrs and 32 mins — When Book 2 (Infidel) was released last week, I hoped it was a good sign that God’s War would also be coming to audio. On Jeff VanderMeer’s a dozen of the year’s best, nominated for a Nebula Award, a finalist for the Locus Award for Best First Novel, and winner of the Kitchies Golden Tentacle for best debut: “On a ravaged, contaminated world, a centuries-old holy war rages, fought by a bloody mix of mercenaries, magicians, and conscripted soldiers. Though the origins of the war are shady and complex, there’s one thing everybody agrees on – there’s not a chance in hell of ending it. Nyx is a former government assassin who makes a living cutting off heads for cash. But when a dubious deal between her government and an alien gene pirate goes bad, Nyx’s ugly past makes her the top pick for a covert recovery. The head they want her to bring home could end the war—but at what price? The world is about to find out.”

The White Forest By Adam McOmber, Narrated by Susan Duerden — Length: 10 hrs and 55 mins — concurrently in print from Touchstone/Simon & Schuster. “Young Jane Silverlake lives with her father in a crumbling family estate on the edge of Hampstead Heath. Jane has a secret – an unexplainable gift that allows her to see the souls of man-made objects – and this talent isolates her from the outside world. Her greatest joy is wandering the wild heath with her neighbors, Madeline and Nathan. But as the friends come of age, their idyll is shattered by the feelings both girls develop for Nathan, and by Nathan’s interest in a cult led by Ariston Day, a charismatic mystic popular with London’s elite. Day encourages his followers to explore dream manipulation with the goal of discovering a strange hidden world, a place he calls the Empyrean. A year later, Nathan has vanished, and the famed Inspector Vidocq arrives in London to untangle the events that led up to Nathan’s disappearance. As a sinister truth emerges, Jane realizes she must discover the origins of her talent, and use it to find Nathan herself, before it’s too late.” An early review: “A young woman can hear the souls of man-made objects, and they’re not exactly singing happy tunes in McOmber’s Victorian gothic debut.” (Kirkus) 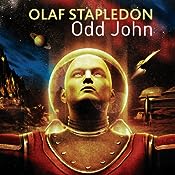 Meanwhile, Audible Ltd has published three audiobooks from one of the early masters of science fiction, Olaf Stapledon. With Odd John (1935, Narrated by Nigel Carrington), Last and First Men (1930, Narrated by Stephen Greif), and Star Maker (1937, Narrated by Andrew Wincott) three books exploring both science fiction and the implications to humanity of those fictions are now in audio.