The middle of September brings a few audiobooks of interest, but my first thoughts on the week are 1. that I was at first incredibly excited when I saw the new Tad Williams urban fantasy novel The Dirty Streets of Heaven: A Bobby Dollar Novel, Book 1 listed — but then it turned out I wasn’t logged in, so Audible was showing me titles not available in my country, and now I have only the horrible, awful knowledge that the audiobook I want to listen to exists, and yet cannot be sold to me. And 2. That my “seen but not heard” list below includes Stormdancer by Jay Kristoff as well as, more mysteriously to me, Steven Erikson’s Gardens of the Moon, which is out in physical media from Brilliance Audio. First world problems, I know. Still, a long-missing audiobook from Nalo Hopkinson and an anticipated new YA audiobook from Libba Bray make for a week worth listening to. Update: Via @MrsTad I have learned that the US audiobook is in production! Hooray!

My pick in adult sf/f releases this week is Midnight Robber By Nalo Hopkinson, Narrated by Robin Miles for Audible Frontiers. Published in 2000 by Aspect / Warner Books, the book was a finalist for the Hugo, Nebula, and PKD Award, as well as a nominee for the James Tiptree, Jr. Award: “It’s Carnival time and the Caribbean-colonized planet of Toussaint is celebrating with music, dance, and pageantry. Masked “Midnight Robbers” waylay revelers with brandished weapons and spellbinding words. To young Tan-Tan, the Robber Queen is simply a favorite costume to wear at the festival – until her power-corrupted father commits an unforgiveable crime. Suddenly, both father and daughter are thrust into the brutal world of New Half-Way Tree. Here monstrous creatures from folklore are real, and the humans are violent outcasts in the wilds. Tan-Tan must reach into the heart of myth and become the Robber Queen herself. For only the Robber Queen’s legendary powers can save her life…and set her free.” Length: 12 hrs and 49 mins. 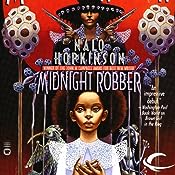 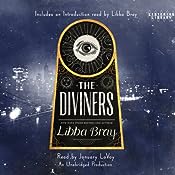 Meanwhile in the “Teen SF/F” listings is the latest from Libba Bray, with her own audio introduction. The Diviners is narrated by January LaVoy for Listening Library: “Evie O’Neill has been exiled from her boring old hometown and shipped off to the bustling streets of New York City – and she is pos-i-tute-ly ecstatic. It’s 1926, and New York is filled with speakeasies, Ziegfeld girls, and rakish pickpockets. The only catch is that she has to live with her uncle Will and his unhealthy obsession with the occult. Evie worries her uncle will discover her darkest secret: a supernatural power that has only brought her trouble so far. But when the police find a murdered girl branded with a cryptic symbol and Will is called to the scene, Evie realizes her gift could help catch a serial killer.” Length: 18 hrs and 14 mins.