The last release week in October has a few intriguing new titles, along with a new “gift edition” of Neil Gaiman’s Stardust and, as Dave already mentioned, a free short story by Gaiman as well.

A Sudden Outbreak of Magic: Contagious Magic By Michael Jasper, Narrated by Alyson Grauer is the one I’ve been waiting on the longest. At 8 hrs and 16 mins it is the first book in a series, in which book two is out in print and ebook, and book three is coming soon. I’ve been following the route of this book from pitch to publication in audio via Audible’s ACX: “A Sudden Outbreak of Magic stars Kelley and Jeroan Strickland, twin teenagers whose family just moved to Dubuque, Iowa. One cold morning in November, Kelley gets “infected” by magic after reading aloud from a small leather bound book she finds. She also blows up the family home in the process. Soon Kelley and Jeroan must face up to a power-hungry, centuries-old Sorcerer who wants to rid the world of what he calls “renegade” magic-users. Only Kelley’s new way of using magic will save their new city and their magically infected friends, though she may lose her brother in the process. A Sudden Outbreak of Magic is a novel about ancient power, growing up, and finding your place within those two very different realms.” 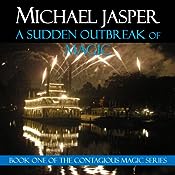 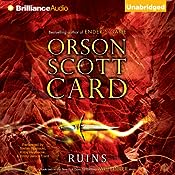 Teen: Ruins: Pathfinder, Book 2 By Orson Scott Card, Narrated by Stefan Rudnicki, Kirby Heyborne, and Emily Janice Card for Brilliance Audio, simultaneously released with the hardcover from Simon Pulse — continuing the story of 2010’s Pathfinder (Simon Pulse, October 30) — Series: Pathfinder, Book 2 — Length: 14 hrs and 17 mins — “When Rigg and his friends crossed the Wall between the only world they knew and a world they could not imagine, he hoped he was leading them to safety. But the dangers in this new wallfold are more difficult to see. Rigg, Umbo, and Param know that they cannot trust the expendable, Vadesh – a machine shaped like a human, created to deceive – but they are no longer certain that they can even trust one another.”

Stardust: The Gift Edition By Neil Gaiman, Narrated by Neil Gaiman — Length: 6 hrs and 38 mins — with a new introduction by Gaiman, accounting for the 11 additional minutes of the “gift edition” of the audiobook which corresponds from the simultaneously published new edition from William Morrow: “This special gift edition will be beautifully packaged in a smaller trim size with a one-piece fine cloth case, a gold-stamped cover, and a whimsical interior design, featuring a frontispiece illustration and line chapter opener ornamentation by noted artist Charles Vess. It will also contain an introductory note by Neil Gaiman.” Oh, you don’t know what Stardust is about? Here quotes: “Tristran Thorn will do anything to win the cold heart of beautiful Victoria Forester—even fetch her the star they watch fall from the night sky. But to do so, he must enter the unexplored lands on the other side of the ancient wall that gives their tiny village its name. Beyond that stone barrier, Tristran learns, lies Faerie . . . and the most exhilarating adventure of the young man’s life.” 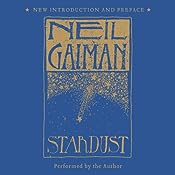 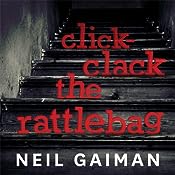 Also new from Gaiman this week is the 12-minute free short story Click-Clack the Rattlebag: A Free Short Story Written and Performed by Neil Gaiman. As explained by Dave in his brief review note, every free download benefits charities at DonorsChoose.org. So if somehow you haven’t downloaded this yes, get to it, and Happy Hallowe’en and a good All Hallows Listen to all.