Two of 2012’s most missing audiobooks and two backlist books from two of my favorite authors highlight the pre-Thanksgiving release week.

The Troupe By Robert Jackson Bennett, Narrated by Luis Moreno for Recorded Books — Length: 18 hrs and 6 mins — Published in February in print and ebook by Orbit, it’s been a leading contender for “most missing audiobook” all year for me, and leads off the Publishers Weekly Best Books of 2012 – SF/F/H list: “Best-selling author Robert Jackson Bennett has won widespread critical acclaim for his unique brand of darkly inventive fiction. In The Troupe, 16-year-old George Carole joins vaudeville in search of Heironomo Silenus, the man he believes to be his father. But what he discovers casts a dark pall over his world: Silenus’ troupe hides a dangerous secret – one that invites death to all in its vicinity.” I’ve been waiting for this since reading the first few sample chapters. Now to find the time… 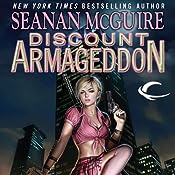 Speaking of long-time members of the “most missing audiobooks of 2012” leaderboard, also out this week is Discount Armageddon: InCryptid, Book 1 By Seanan McGuire, Narrated by Emily Bauer for Audible Frontiers — Length: 11 hrs and 20 mins. Published in March by DAW, it starts a new series for McGuire, author of the October Daye series and (as Mira Grant) the Newsflesh series (Feed, Deadline, Countdown, and Blackout). Here: “Ghoulies. Ghosties. Long-legged beasties. Things that go bump in the night…. The Price family has spent generations studying the monsters of the world, working to protect them from humanity – and humanity from them. Enter Verity Price. Despite being trained from birth as a cryptozoologist, she’d rather dance a tango than tangle with a demon, and is spending a year in Manhattan while she pursues her career in professional ballroom dance. Sounds pretty simple, right? It would be, if it weren’t for the talking mice, the telepathic mathematicians, the asbestos supermodels, and the trained monster-hunter sent by the Price family’s old enemies, the Covenant of St. George. When a Price girl meets a Covenant boy, high stakes, high heels, and a lot of collateral damage are almost guaranteed. To complicate matters further, local cryptids are disappearing, strange lizard-men are appearing in the sewers, and someone’s spreading rumors about a dragon sleeping underneath the city….”

Even longer missing has been the work of Joel Rosenberg, the late author of the long-running Guardians of the Flame series — the first book of which, The Sleeping Dragon, is set to be released in audio later this week. This week, it’s another of his series which gets its start in audio with Ties of Blood and Silver: Thousand Worlds, Book 1, Narrated by Maxwell Glick for Audible Frontiers — Length: 5 hrs and 14 mins — “Elwere – city of rainbows, where the fortunes of the planet Oroga are concentrated in the grasping hands of the privileged few. To David, stolen from Elwere as a baby and raised as a thief of the Lower City, it is a dream of paradise, a treasure trove to which he must find the key, no matter what the cost… And Eschteef – a schrift of the jewel-and-precious-metals schtann, twice the size of a human, more than twice as strong, with frightfully glowing eyes and rows of needle-sharp teeth. It, too, has a dream, a dream of which David has suddenly become the crucial focus. And once a schrift has chosen, nothing can change its path.” 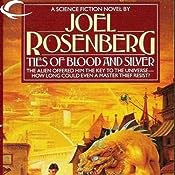 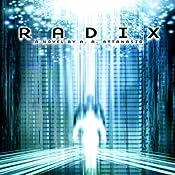 Similarly long-missing is the work of A. A. Attanasio, author of the Arthurian retelling series Arthor (The Dragon and the Unicorn, The Eagle and the Sword, …) — no sign of this in audio yet, however. Earlier this month saw the audio release of his 2006 standalone novel Killing with the Edge of the Moon and this week brings two books from his Radix series of eon-spanning sf, starting with Radix: The Radix Tetrad (Narrated by Sergei Burbank) and, after skipping the middle two books for now, The Last Legends of Earth: A Radix Tetrad Novel (Narrated by David Gilmore). First: “A young man’s odyssey of self discovery in a world eerily alien, yet hauntingly familiar. Set 13 centuries in the future, A. A. Attanasio meticulously creates a brilliantly realized Earth, rich in detail and filled with beings brought to life with intense energy. In this strange and beautiful world, Sumner Kagan will change from an adolescent outcast to a warrior with god-like powers and in the process take us on an epic and transcendent journey.” Then: “Seven billion years from now, long after the Sun has died and human life itself has become extinct, alien beings reincarnate humanity from our fossilized DNA drifting as debris in the void of deep space. We are reborn to serve as bait in a battle to the death between the Rimstalker, humankind’s reanimator, and the zotl, horrific creatures who feed vampire-like on the suffering of intelligent lifeforms.”