Release Week: The Rise of Ransom City, The Dresden Files, The Iron Druid Chronicles, and City of Dark Magic

The last Tuesday in November brings new books in beloved series, as well as a Conan O’Brien-blurbed romp through a fantastical Prague. Still, it’s another sequel which most catches my eye, and another sequel (Hannu Rajaniemi’s The Fractal Prince) which I’m most disappointed to not see in audio this week.

That most-anticipated title for me this week is The Rise of Ransom City: The Half-Made World, Book 2 By Felix Gilman, Narrated by Ramon De Ocampo and Gregory Itzin for Audible Frontiers — Length: 14 hrs and 59 mins. Gliman’s novelette “Lightbringers and Rainmakers” was published in October 2010 by Tor.com and was one of my favorite reads of that year, introducing the delightful character of Harry Ransom and (a bit) of Gilman’s world of The Half-Made World. Harry Ransom made only a cameo appearance in the first novel, but here, right from the outset, it’s the Harry Ransom show, and that’s more than fine by me. The world of The Half-Made World is a kind of “weird west”, a fusion of frontier adventure and fantasy, with Steampunk contraptions as well. As an aside, I discovered another “Whispersync for Voice” price quirk, which would get you the first audiobook in the series for $12.94, including the Kindle version, versus the member price of $17.46 or one credit for the audiobook alone. (See the bottom of the post for another of these “quirks”.) 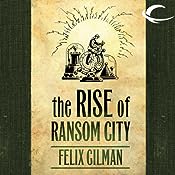 The first of those series continuations is Cold Days: The Dresden Files, Book 14 By Jim Butcher, Narrated by James Marsters for Penguin Audio — Series: The Dresden Files, Book 14 — Length: 18 hrs and 50 mins. Marsters returns as the voice of Harry Dresden after a scheduling conflict kept him off the last book. Here: “After being murdered by a mystery assailant, navigating his way through the realm between life and death, and being brought back to the mortal world, Harry realizes that maybe death wasn’t all that bad – because he is no longer Harry Dresden, Chicago’s only professional wizard. He is now Harry Dresden, Winter Knight to Mab, the Queen of Air and Darkness. After Harry had no choice but to swear his fealty, Mab wasn’t about to let something as petty as death steal away the prize she had sought for so long. And now, her word is his command, no matter what she wants him to do, no matter where she wants him to go, and no matter who she wants him to kill.”

The second of those series continuations is Trapped: The Iron Druid Chronicles, Book 5 By Kevin Hearne, Narrated by Luke Daniels for Random House Audio — Series: Iron Druid Chronicles, Book 5 — Length: 9 hrs and 2 mins. “After twelve years of secret training, Atticus O’Sullivan is finally ready to bind his apprentice, Granuaile, to the earth and double the number of Druids in the world. But on the eve of the ritual, the world that thought he was dead abruptly discovers that he’s still alive, and they would much rather he return to the grave. Having no other choice, Atticus, his trusted Irish wolfhound, Oberon, and Granuaile travel to the base of Mount Olympus, where the Roman god Bacchus is anxious to take his sworn revenge—but he’ll have to get in line behind an ancient vampire, a band of dark elves, and an old god of mischief, who all seem to have KILL THE DRUID at the top of their to-do lists.” Narrator Daniels’ turn as Oberon — the wolfhound, not the fairy king — is a wonderful, smile-inducing pleasure. 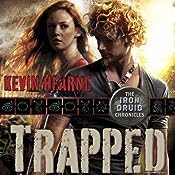 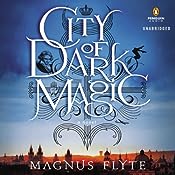 Lastly above the “read more” link is a debut (well, kind of, as it is a new pseudonym for two writers), City of Dark Magic: A Novel By Magnus Flyte, Narrated by Natalie Gold for Penguin Audio — Length: 13 hrs and 33 mins. “Flyte” is a pseudonym for the writing duo of Meg Howrey and Christina Lynch, and that Conan O’Brien blurb? “This deliciously madcap novel has it all: murder in Prague, time travel, a misanthropic Beethoven, tantric sex, and a dwarf with attitude. I salute you, Magnus Flyte!”

There are still some weird little “sweet spots” in the Whispersync for Voice area (hopefully you grabbed the two dozen or so professionally produced audiobooks of free classics when the feature launched), where if you buy the Kindle version, you get the audiobook more cheaply. For example, when checking out some books on Amazon’s list of top 10 sf/f of the year, I found the (er… Amazon-published, like The Mongoliad and the audiobook edition of Redshirts, so Amazon has 3 of its own properties on its list, but whatever, I am digressing…) Seed by Ania Ahlborn. It’s $9.79 member priced at Audible, but if you buy the $2.99 Kindle version, you can get the audiobook for $1.99, so a total of $4.98.

First, buy the Kindle version (http://www.amazon.com/Seed-ebook/dp/B0073XV3K8/) and then, go back to the Kindle page and there should appear a “buy at Audible for $1.99” option link, which automatically adds the audiobook (http://www.audible.com/pd?asin=B008H36SSU) to your cart, for $1.99. Just be careful and not waste a credit on it, which is by default what would happen. Uncheck and apply! Friends don’t let friends use credits on $1.99 titles.