Well here it is, the first release week of 2013 — though most of this week’s haul do herald from 2012. There’s historical fantasy, Warren Ellis, an epic-length sf novel from Peter F. Hamilton, and a new Timothy Zahn Star Wars novel. And, at the bottom, another Whispersync for Voice price quirk. And, don’t forget! The currently running Audible Holiday Sale ends on Wednesday, January 2, at 11:59 PM ET. And come back soon as Dave and I are trying to cobble together our year-in-review. Happy New Year! Next Tuesday brings just a ridiculous haul of something like 100 audiobooks, from the final installment of the Wheel of Time to piles and piles of Dragonlance and Forgotten Realms audiobooks.

Thieftaker: Thieftaker Chronicles, Book 1 (2012) by D. B. Jackson, Narrated by Jonathan Davis for Audible Frontiers — Length: 13 hrs and 34 mins — This one came out in the wee days of 2012, after being first published in print in early fall. “D.B. Jackson” is a new pseudonym for David B. Coe, under which he’ll be writing historical fantasy: “Boston, 1765: In D.B. Jackson’s Thieftaker, revolution is brewing as the British Crown imposes increasingly onerous taxes on the colonies, and intrigue swirls around firebrands like Samuel Adams and the Sons of Liberty. But for Ethan Kaille, a thieftaker who makes his living by conjuring spells that help him solve crimes, politics is for others…until he is asked to recover a necklace worn by the murdered daughter of a prominent family.” 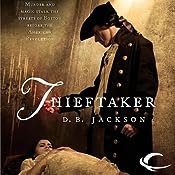 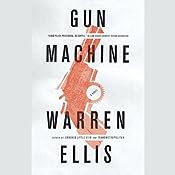 Gun Machine by Warren Ellis, Narrated by Reg E. Cathey for Hachette Audio — Length: 9 hrs and 11 mins — “After a shootout claims the life of his partner in a condemned tenement building on Pearl Street, Detective John Tallow unwittingly stumbles across an apartment stacked high with guns. When examined, each weapon leads to a different, previously unsolved murder. Someone has been killing people for 20 years or more and storing the weapons together for some inexplicable purpose. Confronted with the sudden emergence of hundreds of unsolved homicides, Tallow soon discovers that he’s walked into a veritable deal with the devil. An unholy bargain that has made possible the rise of some of Manhattan’s most prominent captains of industry. A hunter who performs his deadly acts as a sacrifice to the old gods of Manhattan, who may, quite simply, be the most prolific murderer in New York City’s history.”

Great North Road By Peter F. Hamilton, Narrated By Toby Longworth for Tantor Audio — Length: 36 hrs and 34 mins — Out from Macmillan in the UK in September, concurrent with the New Year’s Day US release from Del Rey: “A century from now, thanks to a technology allowing instantaneous travel across light-years, humanity has solved its energy shortages, cleaned up the environment, and created far-flung colony worlds. The keys to this empire belong to the powerful North family – composed of successive generations of clones. Yet these clones are not identical. For one thing, genetic errors have crept in with each generation. For another, the original three clone “brothers” have gone their separate ways, and the branches of the family are now friendly rivals more than allies. Or maybe not so friendly.” 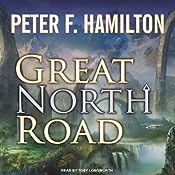 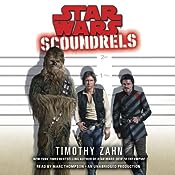 Scoundrels: Star Wars By Timothy Zahn, Narrated By Marc Thompson for Random House Audio — Length: 14 hrs and 1 min — Concurrent with another New Year’s Day hardcover release, this one (obviously) from LucasBooks: “Han Solo should be basking in his moment of glory. After all, the cocky smuggler and captain of the Millennium Falcon just played a key role in the daring raid that destroyed the Death Star and landed the first serious blow to the Empire in its war against the Rebel Alliance. But after losing the reward his heroics earned him, Han’s got nothing to celebrate. Especially since he’s deep in debt to the ruthless crime lord Jabba the Hutt. There’s a bounty on Han’s head – and if he can’t cough up the credits, he’ll surely pay with his hide. The only thing that can save him is a king’s ransom. Or maybe a gangster’s fortune?” I keep finding these almost randomly. This time it’s The Second Ship: The Rho Agenda, Book 1 by Richard Phillips, read by MacLeod Andrews for Brilliance Audio. Normally $13.99, member priced at $9.79, if you buy the Kindle version for $2.99 you can get the audiobook for $1.99 for a total of $4.98.