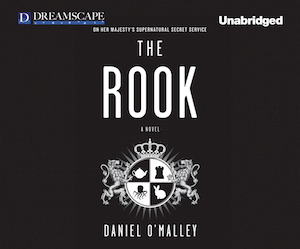 The Rook, by Daniel O’Malley, read by Susan Duerden for Dreamscape

Imagine if J.K. Rowling had decided to do a Ministry of Magic novel and you’ve basically got the set-up for The Rook.

The Rook has a little bit of everything in it: It’s as if O’Malley took some of the best (and worst) tropes from the last 20 years of genre fiction, tossed them into a blender with his own special ingredients, and served up a tasty little cocktail with fruit and an umbrella. It starts off a bit like the Bourne Identity, with Myfanwy – an amnesiac protagonist – who can do brutal, dangerous, and mysterious things. But instead of going on the run, she goes into the office to figure out who set her up. I don’t know if I completely buy that either, but it leads to dangers like possessed houses, sexy vampires, monsters, dragons, and office Christmas parties that O’Malley would’ve been hard-pressed to write about any other way. In general, the results are a lot of fun, and best of all, it’s actually funny.

I didn’t completely love it – the sudden additions of New Cool Magical Thing from chapter to chapter made it feel as if O’Malley was making it up as he was going along – not that there’s anything wrong with that; it just didn’t feel completely united or streamlined in the final analysis. The reveal of who wiped out Myfanwy’s memories, for example, doesn’t feel as planned out as it could as it could’ve been. Additionally, the Checquy, the secret covert organization Myfanwy works for, felt far more morally questionable than either Myfanwy or O’Malley acknowledge.

These are minor quibbles in what was a generally pleasant listen, though. And something O’Malley does really well is use the dual narratives to worldbuild and infodump in a glorious way – the Rook formerly known as Myfanwy has written a notebook to her future amnesiac self about the world she’ll soon be immersed in. It’s a neat trick, and the way the story alternates between the two narratives is a lot of fun.

What I can’t nitpick is Susan Duerden’s fantastic reading. The banter between the characters is delivered with so much fun, I could listen to a whole book featuring Myfanwy and her American counterpart.

I hope O’Malley writes more books in this series, and that some of them involve the POV of non-magical characters connected to the Checquy.

This entry was posted in reviews and tagged daniel o'malley, dave thompson, dreamscape, susan duerden, the rook. Bookmark the permalink.

One Response to Dave reviews: The Rook, by Daniel O’Malley, read by Susan Duerden