It’s an absolutely massive release week to wind up February, with debut novels, anthologies, previously published books in two epic fantasy series coming to audio, on and on. It’s a week so big that even a new book co-authored by Neal Stephenson, Book 3 of The Mongoliad, and new books in The Night of the Swarm and The Imager Portfolio, don’t make it above the fold. (And, of course, more Scalzi, with The Dog King: The Human Division, Episode 7.) I can barely find it in me to complain about the “Seen but not Heard” list. (This is helped by my most anticipated title of the week, Ariel Djanikian’s The Office of Mercy, being booked for a March release from Tantor Audio.) Meanwhile, I’m expecting the first few books in David Drake’s Lord of the Isles series to pop up any day now, and I’m very happy to report that The AudioBookaneers’ own Dave Thompson has turned in his narration of James Maxey’s Bitterwood, which should also be coming soon to an Audible listing near you. From Maxey’s report, he’s very pleased indeed with Dave’s narration, and I’m literally jumping up and down in anticipation. OK. Onto the ridiculous number of…

Fade to Black By Francis Knight, narrated by Paul Thornley for Hachette Audio, concurrent with the print/ebook release from Orbit — Length: 8 hrs and 30 mins — There’s an excerpt available, and a Big Idea post on Scalzi’s Whatever blog, but, seriously, you had me at “noir fantasy/tech secondary world”. This one looks most definitely to be an interesting debut, the first in a new series: “From the depths of a valley rises the city of Mahala. It’s a city built upwards, not across – where streets are built upon streets, buildings upon buildings. A city that the Ministry rules from the sunlit summit, and where the forsaken lurk in the darkness of Under. Rojan Dizon doesn’t mind staying in the shadows, because he’s got things to hide. Things like being a pain-mage, with the forbidden power to draw magic from pain. But he can’t hide forever. Because when Rojan stumbles upon the secrets lurking in the depths of the Pit, the fate of Mahala will depend on him using his magic. And unlucky for Rojan – this is going to hurt.” 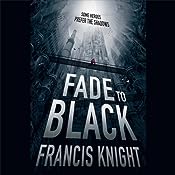 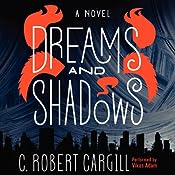 Speaking of anticipated debuts, Dreams and Shadows: A Novel by C. Robert Cargill (Harper Voyager and Harper Audio, Feb 26, 2013). Here’s the pitch: “A brilliantly crafted modern tale from acclaimed film critic and screenwriter C. Robert Cargill – part Neil Gaiman, part Guillermo Del Toro, part William S. Burroughs – that charts the lives of two boys from their star-crossed childhood in the realm of magic and mystery to their anguished adulthoods. There is another world than our own – one no closer than a kiss and one no further than our nightmares – where all the stuff of which dreams are made is real and magic is just a step away. But once you see that world, you will never be the same.”

Between Two Thorns by Emma Newman is also new this week, read by the author for Angry Robot on Brilliance Audio: “In this intelligently-written urban fantasy novel, listeners will sink into Emma Newman’s mirror world, hidden somwhere amid the streets of Bath, England.” Another book with a recent Big Idea write-up, and one to at least check out in this crowded release week: 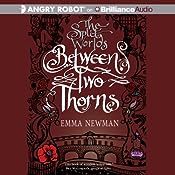 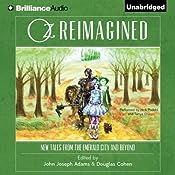 My last pick among the concurrent new releases this week is an anthology from Brilliance Audio, Oz Reimagined: New Tales from the Emerald City and Beyond edited by John Joseph Adams and Douglas Cohen. With stories from Seanan McGuire, Tad Williams, Theodora Goss, Jeffrey Ford, Rachel Swirsky, and more, narrated by Nick Podehl and Tany Eby.

Although not concurrent new releases by any means, this week also brings “new” audiobooks from two of the best epic fantasy series of this young millenium, starting with Deadhouse Gates: Malazan Book of the Fallen, Book 2 By Steven Erikson, narrated by Ralph Lister for Brilliance Audio. At a hair over 34 hours, it’s even longer than the first installment, Gardens of the Moon, which was published late last year. 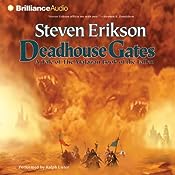 The Judging Eye: The Aspect-Emperor, Book 1 by R. Scott Bakker, narrated by Kevin Orton for Recorded Books. This book begins the second trilogy after Bakker’s Prince of Nothing trilogy, which begins with The Darkness That Comes Before and is available in its entirety from Audible Frontiers narrated by David DeVries. Book two in The Aspect-Emperor, The White-Luck Warrior, has, strangely enough, been available for a while from Recorded Books, also read by Orton. Here: “A luminary in the fantasy genre firmament, R. Scott Bakker returns fans to his acclaimed Prince of Nothing universe with The Judging Eye. Aspect-Emperor Kellhus is waging a terrifying war, subjugating all nations in his path. There are those willing to stand together against him, but these rebellious souls must act quickly and decisively to thwart his mad schemes of power and domination.”

And one final pick above the fold this week, a short indie audiobook, Homo Sylvanus by Amber D. Sistla, narrated by Kimberly Jordan, coming in at just over an hour. “In a future in which genetic research is controlled by a religion, Brennan Candler wants to give his daughter, Tamsyn, a chance to live a long life. He agrees to genetic modification from a Methuselah tree but things will not prove that simple. Sistla creates a believable culture and some good characters and I’ll look forward to more from this author.” (SFRevu.com) 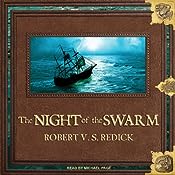 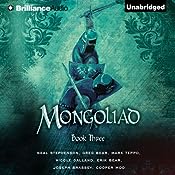 TANTOR AUDIO: The Night of the Swarm (Book 4 in the Chathrand Voyage series) By Robert V. S. Redick, Read By Michael Page; Imager’s Battalion: Book 6 in the Imager Portfolio by L.E. Modesitt, Jr., read by William Dufris; and The Line of Illeniel: Mageborn, Book 2 By Michael G. Manning, narrated By Todd McLaren

AUDIBLE INC: The Last Dragonslayer: The Chronicles of Kazam, Book 1 By Jasper Fforde, narrated By Elizabeth Jasicki; The Lost Novels of Bram Stoker By Bram Stoker, Narrated By Robin Sachs; Darker Angels By S. P. Somtow; and Ladies of Mandrigyn By Barbara Hambly One Response to Release Week: Fade to Black, Dreams and Shadows, Between Two Thorns, Oz Reimagined, Deadhouse Gates, The Judging Eye, and more