Ah, the joys of a long, long, long-awaited audiobook finally arriving. Since meeting author James Maxey a few years ago, I’ve been pestering him about bringing Bitterwood to audio. Now, via ACX and narrator (and fellow AudioBookaneer!) Dave Thompson, it’s finally here: 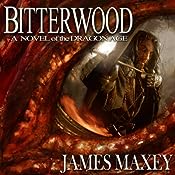 First published in print by Solaris in 2007 and later brought to ebook formats by Maxey himself, Bitterwood begins a 3-book series chronicling the efforts of the titular Bitterwood, dragon hunter: “Bitterwood has spent the past twenty years hunting down dragons, one at a time. But he is getting old and the hate that he has carried in his heart since a group of dragon-soldiers killed his family is beginning to fade. When he kills the royal prince dragon, the king decides the only retribution is genocide of the human race. Bitterwood is forced to enter the Free City, the grand trap designed to eradicate mankind, with thousands of others. Can he lead from within, or can a select few dragons unite to stop the king’s madness from becoming reality. Full of rich characters and drama, this is an amazingly astute vision of our own culture by way of a feudal kingdom where dragons rule, and humans are used as workers or pets.”

For the ebooks, Maxey put together his own covers, but here for the audiobook he has gone all-out, licensing the original cover artwork from Michael Komarck and booking Thompson, longtime short fiction podcaster at PodCastle and now, with Bitterwood, his third full-length professional audiobook credit. Congrats to James and Dave, I look forward to experiencing “The Dragon Age” in audio.

This entry was posted in Uncategorized and tagged bitterwood, dave thompson, james maxey. Bookmark the permalink.