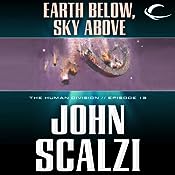 APRIL 3-9, 2013: While overall the release week lacks splashy concurrent new standalone releases, it’s still quite a week with the conclusions both of John Scalzi’s serial novel The Human Division, with a 2-hour Episode 13, Earth Below, Sky Above (cover, left), and of Robin Hobb’s Rain Wilds Chronicles, as well as two outstanding anthologies (ok, one is a collection) from a bit earlier in 2013 (ok, the collection is from the summer of 2012), and! a Mary Robinette Kowal-voiced novel of time travel and intrugue, Neve Maslakovic’s The Far Time Incident. I bemoan most the “missing audiobook” for League of Somebodies by Samuel Sattin, but in a fairly quiet week overall for publishing, the “missing” list isn’t terribly long, either. On to…

Blood of Dragons: Volume Four of the Rain Wilds Chronicles by Robin Hobb, narrated by Anne Flosnik for Harper Audio, the concluding book in Hobb’s series of dragon queens and derring-do. “Years ago, the magnificent dragon queen Tintaglia forged a bargain with the inhabitants of the treacherous Rain Wilds. In exchange for her protection against enemy invaders, the humans promised to protect an unhatched brood of dragons. But when the dragons emerged as weak and misshapen hatchlings unable to fend for themselves, dragonkind seemed doomed to extinction. When even Tintaglia deserted the crippled young dragons, the Rain Wilders abandoned the burden of caring for the destructive and ravenous creatures. They were banished to a dangerous and grueling journey in search of their ancient dragon homeland, the lost city of Kelsingra, accompanied by a band of young and inexperienced human keepers, also deemed damaged and disposable.” 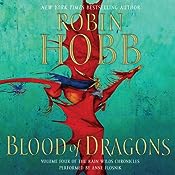 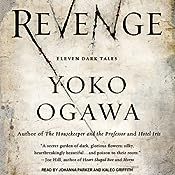 Revenge: Eleven Dark Tales by Yoko Ogawa, translated by Stephen Snyder, and narrated by Kaleo Griffith and Johanna Parker for Tantor Audio. Coming in at about four-and-a-half hours is this short anthology published earlier this year by Picador, which I’ve been interested in since reading about it at WeirdFictionReview.net. “An aspiring writer moves into a new apartment and discovers that her landlady has murdered her husband. Elsewhere, an accomplished surgeon is approached by a cabaret singer, whose beautiful appearance belies the grotesque condition of her heart. And while the surgeon’s jealous lover vows to kill him, a violent envy also stirs in the soul of a lonely craftsman. Desire meets with impulse and erupts, attracting the attention of the surgeon’s neighbor – who is drawn to a decaying residence that is now home to instruments of human torture. Murderers and mourners, mothers and children, lovers and innocent bystanders – their fates converge in an ominous and darkly beautiful web. Yoko Ogawa’s Revenge is a master class in the macabre that will haunt you to the very end.”

Next up is a collection, The Woman Who Married a Cloud: The Collected Short Stories of Jonathan Carroll by Jonathan Carroll, published in exquisite hardcover by Subterranean Press late last July, here narrated by Robin Bloodworth and Suehyla El Attar for Audible Inc. “Thirty-eight extraordinary stories from award-winning author Jonathan Carroll. For more than 30 years, Jonathan Carroll’s writing has defied genre conventions. Known for his novels—including The Land of Laughs, Bones of the Moon, Sleeping in Flame, and many other compelling and often surreal stories—Carroll has also created an eloquent body of short fiction. The Woman Who Married a Cloud brings his stories together for the first time. In the title story, a matchmaking effort goes awry and leads one woman to a harrowing moment of self-discovery. In “The Heidelberg Cylinder”, Hell becomes so overcrowded that Satan sends some of his lost souls back to Earth. And in “Alone Alarm”, a man is kidnapped by multiple versions of himself.By turns haunting, melancholic, and enchanting, Carroll’s richly layered stories illuminate universal experiences, passions, and griefs. Described by NPR’s Alan Cheuse as “so richly imaginative, so intellectually daring,” The Woman Who Married a Cloud is essential for Carroll fans and short-story lovers alike.” 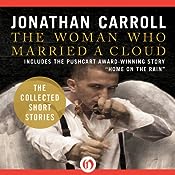 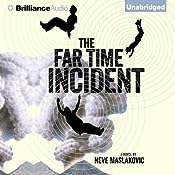 Lastly, The Far Time Incident by Neve Maslakovic, narrated by Mary Robinette Kowal for Brilliance Audio, out concurrent with the print/ebook release from Amazon.com’s 47North. (Amazon published Maslakovic’s earlier novel, Regarding Ducks and Universes, via AmazonEncore in 2011.) Here, it’s more science-infused, mind-bending space-time quandaries: “Thanks to the time travel lab at St. Sunniva University, history is no longer a mystery. But when the beloved co-inventor of the university’s time machine is inexplicably smeared across time, academic exploration and the future of St. Sunniva is thrown into doubt. As assistant to the dean of science, Julia Olsen is tasked with helping Campus Security Chief Nate Kirkland quietly examine this rare mishap…then, just as quietly, make it go away. But when the investigation indicates that the professor’s disappearance may have been a murder, those inspecting the incident unwittingly find themselves caught in a deadly coverup – one in which history itself is the weapon .From the snow-blanketed walkways of St. Sunniva’s campus to the sun-bleached cobblestone of ancient Pompeii’s roads, The Far Time Incident is a lively romp through history, science, and the academic world in the wake of a crime.” 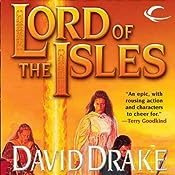 PENGUIN AUDIO: The Interestings: A Novel by Meg Wolitzer (Fiction)

LISTENING LIBRARY:  The Flame in the Mist By Kit Grindstaff, Narrated By Rosalyn Landor

AUDIBLE INC: Wool By Hugh Howey, Narrated By Amanda Sayle (less than a year after author Howey published a previous recording by Minnie Goode via ACX? and a third recording, after the Random House UK edition made it two?); Some Things Come Back By Robert Morgan; (Teen) Hammer of Witches By Shana Mlawski; (Teen) The Secret Room By Antonia Michaelis, translated by Mollie Hossmer-Dillard; and (Fiction) The Great Gatsby By F. Scott Fitzgerald, Narrated By Jake Gyllenhaal

INDIE: The Adventures of Amanda Love By Devlin Church and Michael Angel; Rise and Fall: Book One of the Blood and Tears Trilogy By Joshua P. Simon, Narrated By Jonathan Waters; and Rig: A Novel of Terror By Bryan W. Alaspa