May 15-21, 2013: A bit of a lull after last week’s haul, but certainly none the lesser in top-level impact as a long, long hoped-for literary fiction title is here this week in the form of Will Self’s Booker-shortlisted Umbrella. But don’t worry, sf/f fans, whether “sf” or “f” strikes your fancy there are a few audiobooks to check out this week as well, of course. There’s also a particularly strong crop of “indie” releases (see a selection of those in the “also out this week” listings) as well as a few more “mainstream” fiction titles that may pique.

Umbrella: A Novel by Will Self, narrated by John Lee for Audible Inc. by arrangement with Grove/Atlantic. Published in the UK last year and shortlisted for the Booker, the latest novel from Self was published in the US in January and finally comes to audio. “Moving between Edwardian London and a suburban mental hospital in 1971, Umbrella exposes the 20th century’s technological searchlight as refracted through the dark glass of a long-term mental institution. While making his first tours of the hospital at which he has just begun working, maverick psychiatrist Zachary Busner notices that many of the patients exhibit a strange physical tic: rapid, precise movements that they repeat over and over. One of these patients is Audrey Dearth, an elderly woman born in the slums of West London in 1890. Audrey’s memories of a bygone Edwardian London, her lovers, involvement with early feminist and socialist movements, and, in particular, her time working in an umbrella shop, alternate with Busner’s attempts to treat her condition and bring light to her clouded world. Busner’s investigations into Audrey’s illness lead to discoveries about her family that are shocking and tragic.” 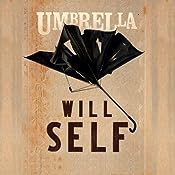 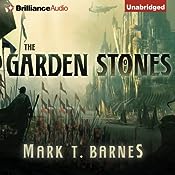 The Garden of Stones: Echoes of the Empire, Book 1 by Mark T. Barnes, narrated by Nick Podehl for Brilliance Audio, concurrent with the print/ebook release from Amazon’s 47North, tops my interest meter this week in terms of fantasy and science fiction, not the least reason being that it is narrated by Podehl, the voice of the US editions of Patrick Rothfuss’ Kingkiller Chronicles. Australian writer and Clarion South alumnus Barnes sold the first three books to Amazon last July, and Tor.com has an excerpt. Here’s the pitch: “Fueled by visions promising him prolonged life and political power, the dying Corajidin, leader of a millennia-old dynasty, has brought the nation of Shrian to civil war. But is his bright destiny assured, or do the events unfolding around him promise a more ignoble, and finite, future? Indris, warrior-mage of the Seq Scholars and scion of a rival Great House, is caught in the upheaval. Driven by loyalty and conscience to return to a city that haunts his past, Indris reluctantly accepts the task of finding a missing man, the only one able to steer the teetering nation toward peace.The celebrated warrior-poet, Mari, touches both men’s lives: one as daughter, one as lover. As her world unravels around her, can she be true to both her duty to blood, and her own desires for freedom and happiness?”

While I still retain most of my decade-long allergy to most YA-oriented fiction, closer to middle grade books can still be a welcome listen. In that category this week: The Planet Thieves By Dan Krokos, narrated By Kirby Heyborne for Blackstone Audio, concurrent with its print/ebook release from Starscape (Tor). “13-year-old Mason Stark and 17 fellow cadets from the Academy for Earth Space Command (ESC) boarded the SS Egypt for a routine voyage to log their required space hours when they are attacked by the Tremist, an alien race at war with humanity. With the captain and crew dead, injured, or taken prisoner, Mason and the cadets are all that’s left to warn the ESC. Soon they find out the reason the Tremist chose to attack: the Egypt is carrying a weapon that could change the war forever. Mason will have to lead the cadets in a daring assault to take back the ship, rescue the survivors, and recover the weapon – before there isn’t a war left to fight.” 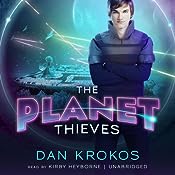 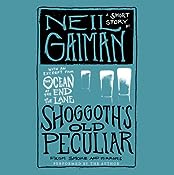 And… apparently I missed this last week? How? Shoggoth’s Old Peculiar: A Free Short Story by Neil Gaiman, Plus a Preview of The Ocean at the End of the Lane written and read by Neil Gaiman for Harper Audio. It runs nearly an hour, all told: “‘Shoggoth’s Old Peculiar’, a short story from Neil Gaiman’s collection Smoke and Mirrors: Short Fictions and Illusions, follows an American student’s walking tour of the British coastline, which takes an odd turn when he comes to the town of Innsmouth. This free short story also includes a preview of The Ocean at the End of the Lane: A Novel, the author’s next full-length novel, available now for pre-order and due out on June 18.” (This had been the short story “Cold Colors” when I bought it, but it morphed into “Shoggoth’s Old Peculiar” by the time I downloaded it.) 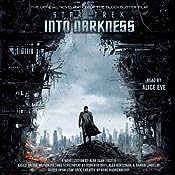 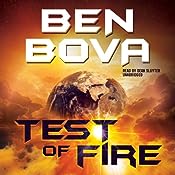 SHADOW MOUNTAIN: The Void of Mist and Thunder: The 13th Reality, Volume 4 By James Dashner, narrated By Kirby Heyborne 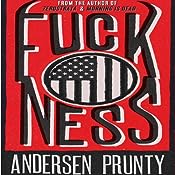 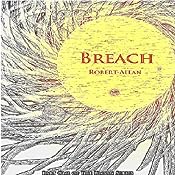 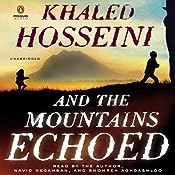 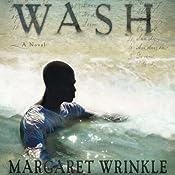 This entry was posted in Release Week and tagged dan krokos, neil gaiman, will self. Bookmark the permalink.