Release Week: The Shining Girls, Liminal States, Shattered Pillars, Siege and Storm, We Are All Completely Beside Ourselves, The Wall, The Constantine Affliction, Clockwork Fairy Tales, Bullettime, The Choir Boats, and more

MAY 29-JUNE 4, 2013: I really, really should have posted a “Release Midweek” this weekend, as I hardly know where to start in recapping this first release week in June. Do  I highlight the baker’s dozen of Audible productions of ChiZine titles from last Wednesday, highlighted for me by Nick Mamatas’ Bullettime and Daniel Rabuzzi’s The Choir Boats? Do I focus instead on the concurrent new releases, and if so do I go with adult novels, young adult, anthologies, or maybe even a non-genre pick? Or do I highlight other books from 2012 and earlier (The Wall, first published in German in the 1960s) now in audio? Even nudging, barely, Stephen King’s new short novel Joyland, off the list? Decisions are hard; let’s pick ’em all:

The Shining Girls: A Novel by Lauren Beukes, narrated by Khristine Hvam, Peter Ganim, Jay Snyder, Joshua Boone, Dani Cervone, and Jenna Hellmuth for Hachette Audio, out concurrent with the US print/ebook release from Mulholland. Out both in print and audio a bit earlier this year in the UK, this is an all-new audiobook for the US market with a full cast to represent the various point of view characters, primarily Ganim (as a serial killer in the possession of a time traveling house), Hvam (as Kirby, the “Shining Girl” that got away), and Snyder (a Chicago journalist, formerly homicide, currently at the sports desk). Beukes was raw energy in her first novel Moxyland, produced a an absolutely fantastic sophomore book in Zoo City, and here is really establishing a sense of mastery and control over her craft, along with taking several risks along the way — chapters dancing about through timelines, present tense across multiple points of view, and, as she writes in her Big Idea post, potentially disturbing levels of violence. Early reviews are in from Cory Doctorow at BoingBoing and D. Harlan Wilson at the LA Review of Books; and there’s a nearly simultaneously announced TV adaptation by Leonardo DiCaprio’s Appian Way. It’s a book I’ve had in my sights all year and I’m settling in for an enjoyable rest of the listen. 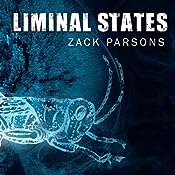 Liminal States by Zach Parsons, narrated by James Patrick Cronin for Audible, Inc. Published last year by Citadel Press (Kensington), it’s been one I’ve been hoping will come to audio for a while: “Beginning in 1874, with a blood-soaked western story of revenge, Liminal States follows a trio of characters through a 1950s noir detective story and 21st-century sci-fi horror. Their paths are tragically intertwined and their choices have far-reaching consequences for the course of American history.” This is SomethingAwful.com editor Parsons’ debut novel, glowingly reviewed by Nick Sharps for SFSignal as “Audacious, genre-bending science fiction epic. Parsons successfully writes in the style of three unique genres and weaves together multiple narratives to form a stunning tour de force unlike any you have ever experienced.”

Next up are a pair of second books in fantasy series, starting with: Shattered Pillars by Elizabeth Bear, narrated by Celeste Ciulla for Recorded Books. Out in ebook and hardcover earlier this year from Tor: “A winner of multiple Hugo Awards and a Locus Award, Elizabeth Bear crafts mesmerizing tales of science fiction and fantasy. The second novel in her Eternal Sky trilogy, Shattered Pillars continues the epic saga of politics, war, and magic that began with Range of Ghosts. Temur the exiled heir and Sarmarkar the Tsarepheth wizard must gather all their strength to fight the dark forces determined to conquer every great empire along the Celedon Road.” 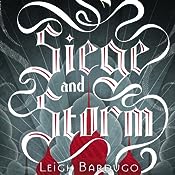 Second is my young adult pick of the week, Siege and Storm by Leigh Bardugo, narrated by Lauren Fortgang for Audible Inc. This is the second book in Bardugo’s Grisha series, concurrent with the print/ebook from Henry Holt, succeeding last year’s Shadow and Bone (which happens to be on sale for $7.95 at the moment). Here: “Hunted across the True Sea, haunted by the lives she took on the Fold, Alina must try to make a life with Mal in an unfamiliar land, all while keeping her identity as the Sun Summoner a secret. But she can’t outrun her past or her destiny for long.”

We Are All Completely Beside Ourselves by Karen Joy Fowler, read by Orlagh Cassidy for Penguin Audio concurrent with the hardcover and ebook release; it’s my (token?) non-genre pick this week. “Meet the Cooke family: Mother and Dad, brother Lowell, sister Fern, and our narrator, Rosemary, who begins her story in the middle. She has her reasons. ‘I spent the first eighteen years of my life defined by this one fact: that I was raised with a chimpanzee.'” 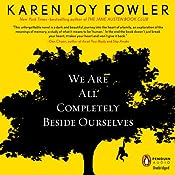 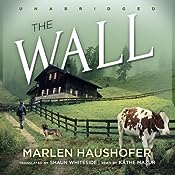 The Wall by Marlen Haushofer, narrated by Kathe Mazur for Blackstone Audio, brings to audio this groundbreaking 1960s German-language sf novel from Austria, first published in English in 1990, and very recently adapted into a feature film. “‘I can allow myself to write the truth; all the people for whom I have lied throughout my life are dead….’ writes the heroine of Marlen Haushofer’s The Wall, a quite ordinary, unnamed middle-aged woman who awakens to find she is the last living human being. Surmising her solitude is the result of a military experiment gone awry, she begins the terrifying work of not only survival but also self-renewal. The Wall is at once a simple and moving journal – with talk of potatoes and beans, of hoping for a calf, of counting matches, of forgetting the taste of sugar and the use of one’s name – and a disturbing meditation on 20th-century history.”

Next up are a pair of clockwork books, starting with: The Constantine Affliction: A Pimm and Skye Adventure, Book 1 by T. Aaron Payton, narrated by John Lee for Audible Frontiers. “T. Aaron Payton” is a new pseudonym for Tim Pratt’s historical fantasy, published last year. Ever since I read the first chapters, I’ve hoped this would come to audio, and here it is from John Lee no less. “It is 1864, and London is a city in transition. The Constantine Affliction – a strange malady that kills some of its victims and physically transforms others into the opposite sex – has spread scandal and upheaval throughout society. Scientific marvels and disasters, such as clockwork courtesans, the alchemical fires of Whitechapel, electric carriages, and acidic monsters lurking in the Thames, have forever altered the face of the city.” 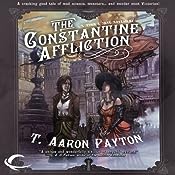 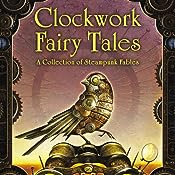 All right, here’s the deluge from last Wednesday, a pile of Audible Inc. productions of ChiZine Press books, many from last year but others a bit earlier. It’s hard to focus on just two of them, but I’ll start with Bullettime by Nick Mamatas, narrated by Brandon Massey. “David Holbrook is a scrawny kid, the victim of bullies, and the neglected son of insane parents. David Holbrook is the Kallis Episkopos, a vicious murderer turned imprisoned leader of a death cult dedicated to Eris, the Hellenic goddess of discord. David Holbrook never killed anyone, and lives a lonely and luckless existence with his aging mother in a tumbledown New Jersey town. Caught between finger and trigger, David is given three chances to decide his fate as he is compelled to live and relive all his potential existences, guided only by the dark wisdom found in a bottle of cough syrup. From the author of the instant cult classic Move Under Ground comes a fantasy of blood, lust, destiny, school shootings, and the chance to change your future.” 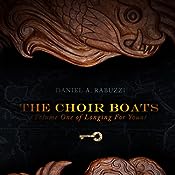 The second ChiZine title (of well more than a dozen, see the Audible Inc. “also out this week” listings below) I want to highlight is The Choir Boats: Longing for Yount, Book 1 By Daniel A. Rabuzzi, Narrated By Kieron Elliot (Book 2, The Indigo Pheasant: Longing for Yount, Book 2, is coming June 12). “London, 1812 – Yount, Year of the Owl. What would you give to make good on the sins of your past? For merchant Barnabas McDoon, the answer is: everything.When emissaries from a world called Yount offer Barnabas a chance to redeem himself, he accepts their price to voyage to Yount with the key that only he can use to unlock the door to their prison. But bleak forces seek to stop him: Yount’s jailer, a once-human wizard who craves his own salvation, kidnaps Barnabas’s nephew. A fallen angel, a monstrous owl with eyes of fire, will unleash Hell if Yount is freed. And, meanwhile, Barnabas’s niece, Sally, and a mysterious pauper named Maggie seek with dream-songs to wake the sleeping goddess who may be the only hope for Yount and Earth alike.” 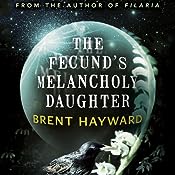 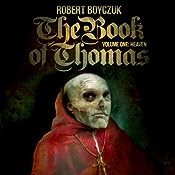 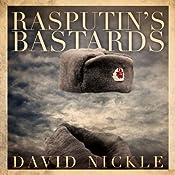 AUDIOGO: Doctor Who: Harvest of Time (3rd Doctor Novel) By Alastair Reynolds, Narrated By Geoffrey Beevers (I don’t often remark on the Dr. Who tie-in novels, but one from Alastair Reynolds can get my attention)

BRILLIANCE AUDIO: The Firebird By Susanna Kearsley, Narrated By Lucy Rayner; and The Totem By David Morrell, Narrated By Danny Campbell

AUDIBLE INC: Swallowing a Donkey’s Eye By Paul Tremblay, Narrated By Casey Jones; Ninja Versus Pirate Featuring Zombies By James Marshall, Narrated By Frederic Basso; The Fecund’s Melancholy Daughter By Brent Hayward, Narrated By Lucinda Gainey (also Filaria, narrated by Evan Greenberg); Picking Up the Ghost By Tone Milazzo, Narrated By Brandon Massey; Katja from the Punk Band By Simon Logan; The Book of Thomas, Volume One: Heaven By Robert Boyczuk, Narrated By Frederic Basso; Remember Why You Fear Me: The Best Dark Fiction of Robert Shearman By Robert Shearman; Westlake Soul By Rio Youers, Narrated By Evan Greenberg; Shoebox Train Wreck By John Mantooth, Narrated By Craig Jessen; Rasputin’s Bastards By David Nickle, Narrated By Ken Kliban; and Janus by John Park, narrated by Thomas Stephen; (Fiction) Busy Monsters: A Novel By William Giraldi, Narrated By Jeff Allin; (Teen) Let the Sky Fall By Shannon Messenger, Narrated By Kristen Leigh, and Nick Podehl; (Teen) The Pearl Wars: Skyship Academy, Book 1 By Nick James, Narrated By Jeffrey Kafer; and (Fiction) The Blood of Heaven by Kent Wascom — “an epic novel about the American frontier in the early days of the nineteenth century”

CHERRY HILL: If Not for the Dawn By Dane St. John, Narrated By David DeBoy 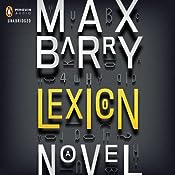 One Response to Release Week: The Shining Girls, Liminal States, Shattered Pillars, Siege and Storm, We Are All Completely Beside Ourselves, The Wall, The Constantine Affliction, Clockwork Fairy Tales, Bullettime, The Choir Boats, and more