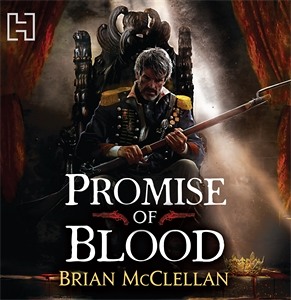 What is it you want from Epic Fantasy these days? To get a sense of what life was like in some fantastical medieval time period? Maybe just the opposite – escapism? A sense of adventure and wonder? If it’s a cool system of magic, Brian McClellan’s Promise of Blood has you covered. It kicks off a new fantasy trilogy featuring Powder Mages – magicians who consume or ingest gunpowder that makes them the flintlock equivalent of Wanted’s assassins – they can make bullets go a farther distance than they should, see targets beyond a mere mortal’s vision, cause gunpowder to explode with a thought, and even change a bullet’s direction.

I like all the above reasons when it comes to Epic Fantasy, but I need characters I’m invested in if I’m going to care about everything they’re doing.  Like many fantasies these days, we’re treated to multiple points of view, and our characters mostly felt pretty standard. Tamis has just overthrown the king and has his bloody hands full executing royals and building a new regime. Taniel, his son, is a soldier he assigns the dangerous job of tracking down a royal (non-powder mage) sorcerer, or a Privileged. He’s also a Powder Mage with an unhealthy addiction to gunpowder. Adamat is an investigator hired by Tamis to unearth a dangerous secret.  And Nila is a laundress.

For a general and warlord, Tamis felt a bit uneven – he made some choices in the second half of the book that didn’t seem to jive with his character. Taniel’s addiction felt like a missed opportunity – a magician addicted to gunpowder should be a huge metaphor, but there’s little done with it. Adamat was the only viewpoint character I found satisfying, even if his investigation went a bit easy at the end.

But my biggest frustration was the novel’s portrayal of women. Nila is the only female viewpoint character (and of the four, she has the least amount of time on the page). She’s a laundress, and she spends most of the storyline trying to save a boy. She’s also nearly raped in her first scene. Julene is a sorcerer who slept with Tamis to earn his trust and her position, and her ruthless and volatile attitude make her motivations circumspect. Ka-Poel is a “savage” and a sorcerer that Taniel encountered in his adventures, and now loyally stays by his side. Finally, there’s Vlora, a female Powder Mage, and Taniel’s ex-fiance, whom he found in another man’s bed. Vlora seems like she might be an interesting character (and to be fair, she may eventually become one in further volumes), but we don’t get to see much about her or her motivations – only how she’s seen by Tamis and Taniel. All we’re told about her affair is that she was seduced by an expert in court politics, and she was probably incapable of fending off her suitor’s advances. Perhaps her backstory and motivations will be made clearer in future volumes, but the suggestion that she just couldn’t handle a rake coming on to her because she doesn’t have enough willpower irritates me.

All of these women are mostly defined by their relationships (often sexual) with men – by their loyalty or disloyalty to them, and not by their own motivations or agency. That’s frustrating to me, and I sincerely hope McClellan can do better next time out. He’s got a fascinating world and magic system, but right now the women in it seem to be there to further the characterization of the men.

One of the reasons I couldn’t stop listening to the book, despite these frustrations, was Christan Rodska’s strong narration. His character voices boom, and make you want to take a hit of powder and believe in the magic. He provides a certain amount of gravity to the story I’m not sure I would’ve found in the text alone. Fans of Roy Dotrice take note!

In the day and age where G.R.R.M.’s A Game of Thrones/A Song of Ice and Fire dominates the bookshelves and televisions, it’s hard not to feel it overshadow a fledgling series like this one. I suspect with the Powder Mage Trilogy’s unique system of magic, this flintlock fantasy will find fans, but it has a ways to go before it lures me back for another taste of gunpowder.

Special thanks to Hatchette Audio for providing me with a copy of this audiobook.