I’ve recently found out about a Kickstarter campaign for an audiobook edition of When Women Were Warriors and I am very excited to both be a backer and to share the project with my fellow audiobibliophiles: 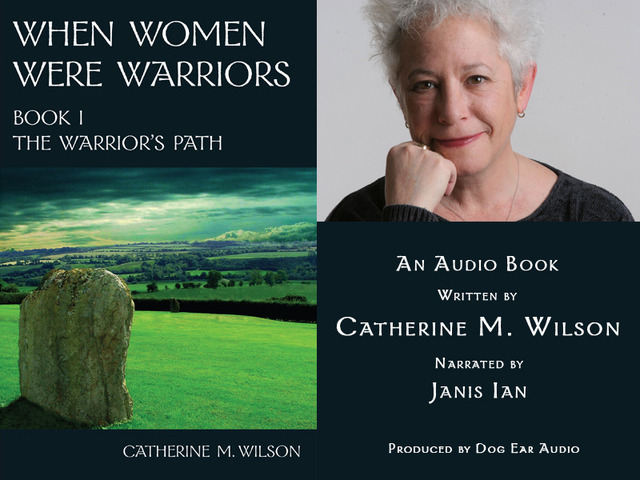 Catherine M. Wilson‘s When Women Were Warriors is a trilogy, and book one, The Warrior’s Path, won the 2010 EPIC Ebook Award for Fiction. (And happens to be free as of this writing, on Kobo, Nook, Kindle, and likely other places.)

Janis Ian is an acclaimed singer, songwriter, musician, columnist, and science fiction author, who happens to also be the reigning Grammy Award winner for narrating her autobiography, Society’s Child.

“All the women of my family had gone to war… Now my turn had come…” So begins the heroic story of Tamras, narrated by Janis Ian.

“All the women of my family had gone to war… Now my turn had come…So it is the custom that a free woman leave her mother’s house to bind herself and those of her blood to a neighboring clan, either by the sword or by the cradle.”

Set in the British Isles during the Bronze Age, the first book in this epic trilogy tells the tale of Tamras, a young woman of the warrior class who leaves home to be fostered in Merin’s house, a fortress guarding the northern border of a rich agricultural valley. There she expects to find a mentor who will teach her the skills she will need to take her place in her community.

As Janis writes,”On vacation with my trusty Kindle, I read through it in two days and was so taken with the characters that I ordered the second and third in the series.” She gave it five stars, and the author took note. A few years later, the two met after one of Ian’s concert appearances. Says the singer “I was so excited to meet her, I blurted out ‘Hey, I just won a Grammy for “Best Spoken Word – Society’s Child”, and I’m looking for more narration work, if you ever want to make an audiobook….”   That connection resulted in Janis signing on to narrate Book 1 of this Tolkienesque story.

So! Stop what you are doing, head over to the Kickstarter campaign, and check it out, share it with your friends, etc. Let’s do this!

This entry was posted in news and tagged catherine m. wilson, janis ian, kickstarter, when women were warriors. Bookmark the permalink.