I haven’t done a “received” post in a while, so in the interest of openness and acknowledgement, here’s what we’ve asked for and received this summer.

The Planet Thieves by Dan Krokos, read by Kirby Heywood for Blackstone Audio (Sam) — I wasn’t entirely sure of the age range for this one, which ended up being somewhere in between young reader and young adult. We don’t have the wide-eyed innocence of childhood or (thankfully) the jaded apathy of too many YA novels. Instead it’s an adventure for 13-year-olds. In space! A bit slow moving to start — lots of internal thinking and second-guessing and self-examination — before the pew! pew! and explosions commense. Publisher description: “When the crew of the SS Egypt gets massacred by an alien race, Mason Stark, a thirteen-year-old cadet in the Earth Space Command, must lead his fellow cadets in a daring surprise attack to retake the ship—and recover a stolen technology that could spell the end of planet Earth.”

Skinner by Charlie Huston, read by Jay Snyder for Hachette Audio (Dave) — Publisher description: “Known by the name of the psychological experiment that fostered his emotionless brutality, Skinner founded his career in “asset protection” on fear. To touch anyone under Skinner’s protection was to invite destruction. A savagely effective methodology, until Skinner’s CIA handlers began to fear him as much as his enemies did and banished him to the hinterlands of the intelligence community. Now, a cyber-terrorist attack on the US power grid is about to end that long exile. His asset is Jae, a roboticist with a gift for seeing the underlying systems violently shaping a new era of global guerrilla warfare. At the root of is all is a young boy, the innocent seed of a plot grown in the slums of Mumbai. Brought to flower, that plot will tip the balance of world power in a perilous new direction.” 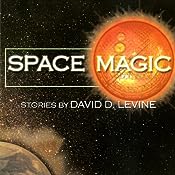 Space Magic by David D. Levine and Sara A. Mueller, narrated by David D. Levine for Book View Cafe (Dave) — Publisher description: “This Endeavour Award-winning collection pulls together 15 critically acclaimed science fiction and fantasy stories that take readers from a technicolor cartoon realm to an ancient China that never was, and from an America gone wrong to the very ends of the universe. Including the Hugo Award-winning Tk’Tk’Tk, the Writers of the Future Award winner Rewind, Nucleon, The Tale of the Golden Eagle, and many other highly-praised stories, Space Magic shows David D. Levine’s talents not only as a gifted writer but as a powerful storyteller whose work explores the reaches of space as well as the depths of the human heart.”

Love Minus Eighty by Will McIntosh, read by Kevin T. Collins, Eileen Stevens, and Ali Ahn for Hachette Audio (Sam) — I owe a long-overdue review for this fantastic near/medium future sf novel which builds on McIntosh’s award-winning short story “Bridesicle” and which was very well-cast and narrated. My favorite sf novel of the year so far, though I have plenty of catching up to do still. Publisher description: “In the future, love is complicated and death is not necessarily the end. Love Minus Eighty follows several interconnected people in a disquieting vision of romantic life in the century to come.”

The Kid by Dan Savage, read by Savage for Penguin Audio (Sam) — As an adoptive dad myself, I was curious about Savage’s 1999 memoir finally coming to audio. I haven’t made the time to sneak it into my listening yet — I tend to sneak memoirs in during road trips, and I haven’t had a solo road trip in a good while. Publisher description: “[A] celebration of family and the lengths some people—gay and straight—will go to in order to create one of their own.”

The Cuckoo’s Calling (The Cormoran Strike Series, book 1) by J.K. Rowling writing as Robert Galbraith, read by Robert Glenister for Hachette Audio (Dave) — We’ll admit it, as did TIME and countless other outlets, we passed on this one when it first came across. (How many completely non-speculative mystery novels have we ever picked up?) But when the word broke out that it was Rowling, Dave stepped up with a review. Publisher description: “After losing his leg to a land mine in Afghanistan, Cormoran Strike is barely scraping by as a private investigator. Strike is down to one client, and creditors are calling. He has also just broken up with his longtime girlfriend and is living in his office. Then John Bristow walks through his door with an amazing story: his sister, the legendary supermodel Lula Landry, known to her friends as the Cuckoo, famously fell to her death a few months earlier. The police ruled it a suicide, but John refuses to believe that. The case plunges Strike into the world of multimillionaire beauties, rock-star boyfriends, and desperate designers, and it introduces him to every variety of pleasure, enticement, seduction, and delusion known to man.”

American Elsewhere by Robert Jackson Bennett, read by Graham Winton for Recorded Books (Dave) — Dave and I were both eager to listen to this one, but he was patient enough for a review copy, which he’s already turned into a review. I also loved this novel and audiobook, and neither Dave nor I came up with a better one-line review than The Guilded Earlobe‘s “Kaleidoscope of What the Fuckery.” Publisher description: “Some places are too good to be true. Under a pink moon, there is a perfect little town not found on any map. In that town, there are quiet streets lined with pretty houses, houses that conceal the strangest things. After a couple years of hard traveling, ex-cop Mona Bright inherits her long-dead mother’s home in Wink, New Mexico. And the closer Mona gets to her mother’s past, the more she understands that the people of Wink are very, very different….”

The Fall of the Kings (Riverside, book 3) by Ellen Kushner and Delia Sherman, narrated by Kushner, Nick Sullivan, Neil Gaiman, Simon Jones, Katherine Kellgren, Robert Fass, Richard Ferrone, and Tim Jerome for Neil Gaiman Presents (Dave) — Dave really, really liked the Audie Award winning first installment (Swordspoint), and liked book two (The Privilege of the Sword) even more. Now he’s listing The Fall of the Kings as his current listen and I’m eagerly awaiting his verdict. Publisher description: “In this stunning follow-up to Kushner’s The Privilege of the Sword and the Audie-award winning Swordspoint, co-author Delia Sherman (The Freedom Maze) joins Ellen to return to that world of labyrinthine intrigue, where sharp swords and even sharper wits rule. This time, they explore the city’s University, where a troubled young nobleman and his scholar lover find themselves playing out an ancient drama destined to explode their society’s smug view of itself.”

Night Film by Marisha Pessl, read by Jake Weber for Random House Audio (Sam) — Well, wow. I ended up really, really liking this one. You give up some of the interesting formatting of the print book (excerpts from websites and newspaper articles, etc.) but gain a rich narration by Weber for a book that piles enigmas atop secrets and buries it under some delicious unknowns. Publisher description: “On a damp October night, beautiful young Ashley Cordova is found dead in an abandoned warehouse in lower Manhattan. Though her death is ruled a suicide, veteran investigative journalist Scott McGrath suspects otherwise. As he probes the strange circumstances surrounding Ashley’s life and death, McGrath comes face-to-face with the legacy of her father: the legendary, reclusive cult-horror-film director Stanislas Cordova—a man who hasn’t been seen in public for more than thirty years.”

Lookaway, Lookaway by Wilton Barnhardt, read by Scott Shepherd for Macmillan Audio (Sam) — I’ve already enjoyed the tone, language (“a ziggurat of a cake”), and humor of this novel set in the North Carolina of 2003, filled with rich historical details from the Civil War, the University of North Carolina, and Charlotte. It’s my current listen, and I don’t know much about where it’s going, only that the ride so far has been bourbon-smooth. On narrator Shepherd, I could be convinced that he had a tumbler or two in the recording booth, along with a rapidly diminishing pack of Lucky Strikes. Publisher description: “Jerene Jarvis Johnston and her husband, Duke, are exemplars of Charlotte, North Carolina’s high society, a world where old Southern money and the secrets behind it meet the new wealth of bankers, real estate speculators, and carpet-bagging social climbers.” The Returned by Jason Mott, read by Tom Stechschulte for Brilliance Audio (Sam) — I’ve already devoured the three Audible free prequel shorts The First: A Prequel to ‘The Returned’, The Sparrow: A Prequel to ‘The Returned’, and The Choice: A Prequel to ‘The Returned’. This one is being reviewed highly for both its compelling, moving story and — with no surprise as the author is a well-regarded poet with two collections under his belt — the language and composition. Mott’s debut novel (out in print/ebook from Harlequin MIRA) will in March 2014 come to the small screen on ABC from Bratt Pitt’s Plan B production company [trailer]. Here, narrator Stechschulte (Cormac McCarthy’s The Road, Mark Van Name’s Children No More and No Going Back, Robert McCammon’s Swan Song, and Daniel Wallace’s Big Fish, among other favorites) navigates a “beautiful meditation on what it means to be human” (Booklist), centered on the inexplicable return of a long-dead child: “Harold and Lucille Hargrave’s lives have been both joyful and sorrowful in the decades since their only son, Jacob, died tragically at his eighth birthday party in 1966. In their old age they’ve settled comfortably into life without him, their wounds tempered through the grace of time…. Until one day Jacob mysteriously appears on their doorstep—flesh and blood, their sweet, precocious child, still eight years old. All over the world people’s loved ones are returning from beyond.” I’ve already had the chance to talk to Mott about the book [interview] and look forward to ruminating over this novel with friends once I convince them all to read it — or listen to it.