NOVEMBER 6-12, 2013: A fairly quiet week in overall numbers — and nearly absent in concurrent new releases — is thunderously punctuated by some fantastic new audiobooks, taking big bites out of my “most missing in audio” list: Marie Brennan’s A Natural History of Dragons, Ann Leckie’s Ancillary Justice, S.M. Wheeler’s Sea Change, Teresa Frohock’s Miserere, Samuel Sattin’s League of Somebodies, and E.C. Myers’ Fair Coin. Though it’s not all good news, as my “seen but not heard” list this week is highlighted by Nicola Griffith’s Hild (though an Anne Flosnick-narrated audiobook is coming in two weeks), Cherie Priest’s Fiddlehead, and Trish MacGregor’s Apparation. Also: 1. Late last month Dog Ear Audio posted a Kickstarter update with a sample of Janis Ian’s narration of When Women Were Warriors and it sounds so very, very good. Check it out — it’s a public update and so even if you weren’t a backer it should be available. And: 2. The Black Tribbles podcast posted its first podcast anthology of “afro-futuristic tales inspired by the late Octavia Butler”. Meanwhile, the week-long contest for a 6-month subscription to Audiobooks.com is up to just six entries for “most overlooked” speculative fiction novel of 2013, so if you want pretty decent odds at winning the contest, get your comment in by Monday. Enjoy! And stay tuned; we’re planning an absolutely huge epic fantasy audiobook giveaway to run soon. Update: Some big, big audiobook news to pass along as, and I don’t know exactly when they went up, but Cory Doctorow’s audiobooks (Makers, Little Brother, Pirate Cinema, and For the Win) all have gone live at Downpour.com. More links and info soon!

First up, and actually it has been available at Downpour.com for a couple of weeks now — it should be available on Audible.com by Friday — but somehow escaped my notice until this week, is one of my most missing in audio for 2013, Marie Brennan’s A Natural History of Dragons: A Memoir by Lady Trent, published in print and ebook by Tor Books in February and now in audio, read by the fantastic Kate Reading (Brandon Sanderson’s The Way of Kings, Robert Jordan’s The Wheel of Time, Cherie Priest’s Boneshaker, Jim Butcher’s Codex Alera, Guy Gavriel Kay’s Ysabel) for Macmillan Audio. “You, dear reader, continue at your own risk. It is not for the faint of heart—no more so than the study of dragons itself. But such study offers rewards beyond compare: to stand in a dragon’s presence, even for the briefest of moments—even at the risk of one’s life—is a delight that, once experienced, can never be forgotten. . . . All the world, from Scirland to the farthest reaches of Eriga, know Isabella, Lady Trent, to be the world’s preeminent dragon naturalist. She is the remarkable woman who brought the study of dragons out of the misty shadows of myth and misunderstanding into the clear light of modern science. But before she became the illustrious figure we know today, there was a bookish young woman whose passion for learning, natural history, and, yes, dragons defied the stifling conventions of her day. Here at last, in her own words, is the true story of a pioneering spirit who risked her reputation, her prospects, and her fragile flesh and bone to satisfy her scientific curiosity; of how she sought true love and happiness despite her lamentable eccentricities; and of her thrilling expedition to the perilous mountains of Vystrana, where she made the first of many historic discoveries that would change the world forever.”

Speaking of the most missing audiobooks of 2013, Ann Leckie’s Ancillary Justice is also out this week from Recorded Books, just a few handfuls of weeks after its print and ebook publication by Orbit in early October. Narrator Celeste Ciulla is new to me, though not to my wishlist as she also narrates Elizabeth Bear’s Range of Ghosts and Shattered Pillars. Here, Ancillary Justice has been released to rave reviews, most recently being named a write-in semi-finalist for the Goodreads Choice Science Fiction novel of the year. “On a remote, icy planet, the soldier known as Breq is drawing closer to completing her quest.
Breq is both more than she seems and less than she was. Years ago, she was the Justice of Toren–a colossal starship with an artificial intelligence linking thousands of corpse soldiers in the service of the Radch, the empire that conquered the galaxy.
An act of treachery has ripped it all away, leaving her with only one fragile human body. And only one purpose–to revenge herself on Anaander Mianaai, many-bodied, near-immortal Lord of the Radch. From debut author Ann Leckie, Ancillary Justice is a stunning space opera that asks what it means to be human in a universe guided by artificial intelligence.”

And another of those “missing” audiobooks of 2013 has until now been Sea Change by S.M. Wheeler, published in print and ebook by Tor Books in June, also now in audio from Recorded Books, read by Bianca Amato (Philippa Gregory’s The Cousins’ War, Jo Walton’s Small Change, Charles Stross’ Saturn’s Children). “The unhappy child of two powerful parents who despise each other, young Lilly turns to the ocean to find solace, which she finds in the form of the eloquent and intelligent sea monster Octavius, a kraken. In Octavius’ many arms, Lilly learns of friendship, loyalty, and family. When Octavius, forbidden by Lilly to harm humans, is captured by seafaring traders and sold to a circus, Lilly becomes his only hope for salvation. Desperate to find him, she strikes a bargain with a witch that carries a shocking price. Her journey to win Octavius’ freedom is difficult. The circus master wants a Coat of Illusions; the Coat tailor wants her undead husband back from a witch; the witch wants her skin back from two bandits; the bandits just want some company, but they might kill her first. Lilly’s quest tests her resolve, tries her patience, and leaves her transformed in every way.” Miserere: An Autumn Tale by Teresa Frohock has been one of my most missing audiobooks since its print/ebook publication by Night Shade Books in 2011. And here it finally is, narrated by Eileen Stevens (Lisa Shearin’s Raine Benares, Will McIntosh’s Love Minus Eighty, J.M. McDermott’s Never Knew Another, Michael Swanwick’s The Iron Dragon’s Daughter, Caitlin R. Kiernan’s The Red Tree, and Ekaterina Sedia’s The Alchemy of Stone) for Audible Frontiers: “Exiled exorcist Lucian Negru deserted his lover in Hell in exchange for saving his sister Catarina’s soul, but Catarina doesn’t want salvation. She wants Lucian to help her fulfill her dark covenant with the Fallen Angels by using his power to open the Hell Gates. Catarina intends to lead the Fallen’s hordes out of Hell and into the parallel dimension of Woerld, Heaven’s frontline of defense between Earth and Hell. When Lucian refuses to help his sister, she imprisons and cripples him, but Lucian learns that Rachael, the lover he betrayed and abandoned in Hell, is dying from a demonic possession. Determined to rescue Rachael from the demon he unleashed on her soul, Lucian flees his sister, but Catarina’s wrath isn’t so easy to escape!”

League of Somebodies By Samuel Sattin was published in print and ebook in April by Dark Coast Press, here narrated by John Keating for Audible Frontiers. We don’t get too many superhero novels, though an uptick in both frequency and excellence of late (James Maxey’s Nobody Gets the Girl, Austin Grossman’s Soon I Will Be Invincible, Carrie Vaughn’s After the Golden Age, Brandon Sanderson’s Steelheart) makes for some fascinating reading and listening. “Lenard Sikophsky’s father has been feeding him plutonium since the age of six in the hopes of making him the world’s first bona fide superhero. First, he must pass the unusual tests of manhood locked in the centuries old tomb, The Manaton, a secret relic passed down for generations. Falling in love with the beautiful, compulsively suicidal Laura Moskowitz doesn’t make his life any easier. But with the guidance of the Sikophsky men, the antiquated rulebook, and of course a healthy amount of plutonium, Lenard accepts his fate as an exactor of justice. . . . Twenty years later, Lenard’s son Nemo is introduced to the same destiny as his father, only this time the violent entity called THEY are in dangerous pursuit. Lenard’s life and the legacy of his family are put to the test when he is forced to defend everything he loves.” 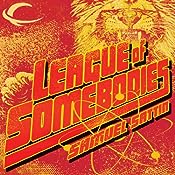 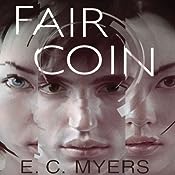 Fair Coin by E.C. Myers, narrated by Macleod Andrews for Audible Inc. One of the the March 2012 Pyr Teen titles (print/ebook), the October 2012 follow-on Quantum Coin is due out soon in audio as well. “Ephraim is horrified when he comes home from school one day to find his mother unconscious at the kitchen table, clutching a bottle of pills. Even more disturbing than her suicide attempt is the reason for it: the dead boy she identified at the hospital that afternoon – a boy who looks exactly like him. While examining his dead double’s belongings, Ephraim discovers a strange coin that makes his wishes come true each time he flips it. Before long, he’s wished his alcoholic mother into a model parent, and the girl he’s liked since second grade suddenly notices him. But Ephraim soon realizes that the coin comes with consequences – several wishes go disastrously wrong, his best friend Nathan becomes obsessed with the coin, and the world begins to change in unexpected ways. As Ephraim learns the coin’s secrets and how to control its power, he must find a way to keep it from Nathan and return to the world he remembers.”

Lastly this week, something a bit… strange. Originally, Hachette Audio had some interesting plans for S., a Mulholland-published collaboration between creator J.J. Abrams (Lost, and now at the helm of both the Star Trek and Star Wars film franchises) and author Doug Dorst. The book is crammed with snippets and clips and so much non-textual content that in the end, Hachette went in another direction. That direction was producing the “novel within the novel”, Ship of Theseus, by fictional (or is he?) author V.M. Straka, as a standalone audiobook. Shades of “The Princess Bride by S. Morgenstern” perhaps? Perhaps. What I can and will tell you is that the audiobook is narrated by Graeme Malcolm, who I most recently heard on an absolutely masterful turn on Kim Stanley Robinson’s Shaman, and that: “Please note: In S., J.J. Abrams and Doug Dorst conceived of a multi-layered novel-within-a-novel that involves handwritten notes in the margins and physical objects slipped between the pages. Because an audio edition is unable to recreate those innately visual pieces of the story and the intended experience of S., the text of Ship of Theseus has been recorded here.  Award-winning actor Graeme Malcolm reads the work of an incendiary novelist who may never have existed at all. What is Ship of Theseus, and who is its mysterious author V.M. Straka? Conceived by filmmaker J.J. Abrams and written by acclaimed novelist Doug Dorst, Ship of Theseus is the central novel within the experience that is S., a multi-faceted narrative of love and mystery. Ship of Theseus is at its core and is the final book written by a man shrouded in deception and violence. It tells the mystical adventure of an equally mysterious figure, who is struggling to discover his own identity. Abducted onto the eponymous ship, the main character is swept into a story that spans oceans and ports, mountains and caves, capitals and citadels. Two things sustain him: his lifelong search for his love, Sola; and the infernal purpose of the ship and its crew. Equal parts Kafka and Lovecraft, Ship of Theseus is both a frightening adventure and a philosophical treasure hunt.” 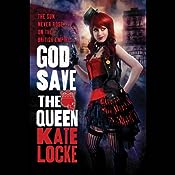 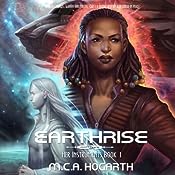 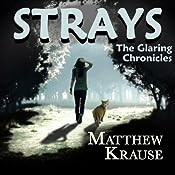