Wednesday, December 25 brings Samantha Shannon’s The Bone Season as a Kindle Daily Deal for $1.99, which along with a $1.99 upgrade via Whispersync for Voice brings you the excellent Audible edition narrated by Alana Kerr. 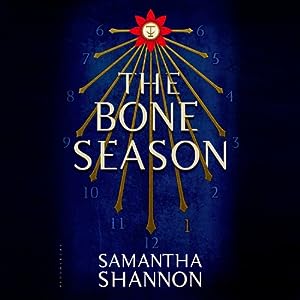 Kerr perfectly brings a subtle Irish flavor to Shannon’s protagonist, 19-year-old dreamwalker Paige Mahoney in London of 2059. “The year is 2059. Nineteen-year-old Paige Mahoney is working in the criminal underworld of Scion London, based at Seven Dials, employed by a man named Jaxon Hall. Her job: to scout for information by breaking into people’s minds. For Paige is a dreamwalker, a clairvoyant, and in the world of Scion, she commits treason simply by breathing…. It is raining the day her life changes forever. Attacked, drugged and kidnapped, Paige is transported to Oxford – a city kept secret for 200 years, controlled by a powerful, otherworldly race.”

Other Whispersync deals today include The 100-Year-Old Man Who Climbed Out the Window and Disappeared ($1.99 and $1.99) and Vicki Pettersson’s Sign of the Zodiac series ($0.99 Kindle and $0.99 Audible each).

This entry was posted in Whispersync Deals and tagged samantha shannon, the bone season. Bookmark the permalink.