Saturday, January 25, 2014: Both books in Richard Ellis Preston’s Steampunk adventure series Chronicles of the Pneumatic are Kindle Daily Deals at $1.99 today, and both offer $1.99 Whispersync for Voice upgrades to their Audible editions, performed by Luke Daniels for Brilliance Audio.

Book one is Romulus Buckle & the City of the Founders. “In a postapocalyptic world of endless snow, Captain Romulus Buckle and the stalwart crew of the Pneumatic Zeppelin must embark on a perilous mission to rescue their kidnapped leader, Balthazar Crankshaft, from the impenetrable City of the Founders. Steaming over a territory once known as Southern California — before it was devastated in the alien war — Buckle navigates his massive airship through skies infested with enemy war zeppelins and ravenous alien beasties in this swashbuckling and high-octane steampunk adventure.” 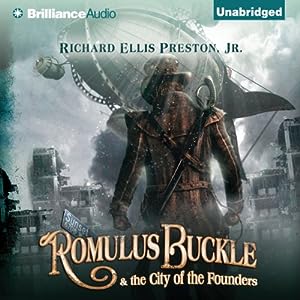 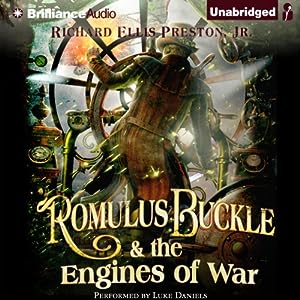 Book 2 is Romulus Buckle & the Engines of War. “The frozen wasteland of Snow World – known as Southern California before an alien invasion decimated civilization – is home to warring steampunk clans. Crankshafts, Imperials, Tinskins, Brineboilers, and many more all battle one another for precious supplies, against ravenous mutant beasts for basic survival, and with the mysterious Founders for their very freedom. Through this ruined world soars the Pneumatic Zeppelin, captained by the daring Romulus Buckle.”

In addition to my interest being aroused simply by the fact that the narrator, Luke Daniels, is fantastic — from Mongoliad to Kevin Hearne’s Iron Druid Chronicles, to GRRM’s Wild Cards anthologies, Ramez Naam’s Nexus, Jay Posey’s Three, and many other outstanding audiobooks over the years — the books were development edited by Jeff VanderMeer, who has seen quite a bit of Steampunk over the years, and I’ve seen him recommend the books on multiple occasions.