Monday, February 3, 2014: While not on the official “Kindle Daily Deal” listings, a massive list of “under $3.99” ebook titles finds a long list of titles to check out. I’ll focus on two recommended listens that I don’t think I’ve mentioned before in Whispersync terms:

Miserere: An Autumn Tale by Teresa Frohock, narrated by Eileen Stevens for Audible Frontiers is on sale today (and perhaps longer?) for $2.99 on Kindle, with a $3.99 Whispersync for Voice upgrade to the Audible edition. Called “Seriously good, edgy fantasy” and “a thoughtful fantasy for the over 30 crowd” by early audiobook reviewers, Frohock’s debut novel also received a starred review from Library Journal: “With richly developed, complex characters and a talent for portraying the horrific nature of evil, the author relates a compelling tale of faith rediscovered, trust regained, and hope reawakened.” Here’s the book description: “Exiled exorcist Lucian Negru deserted his lover in Hell in exchange for saving his sister Catarina’s soul, but Catarina doesn’t want salvation. She wants Lucian to help her fulfill her dark covenant with the Fallen Angels by using his power to open the Hell Gates. Catarina intends to lead the Fallen’s hordes out of Hell and into the parallel dimension of Woerld, Heaven’s frontline of defense between Earth and Hell. When Lucian refuses to help his sister, she imprisons and cripples him, but Lucian learns that Rachael, the lover he betrayed and abandoned in Hell, is dying from a demonic possession. Determined to rescue Rachael from the demon he unleashed on her soul, Lucian flees his sister, but Catarina’s wrath isn’t so easy to escape.” 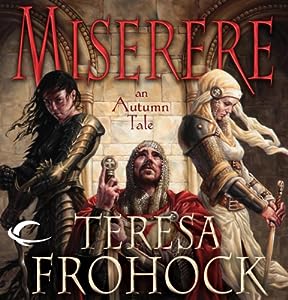 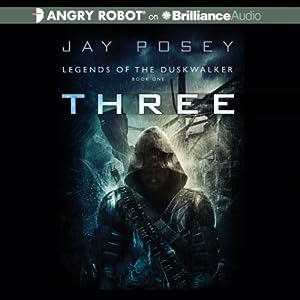 The second is Three (Legends of the Duskwalker) by Jay Posey, narrated by Luke Daniels, available for $1.99 Kindle plus $3.49 Whispersync for Voice upgrade to the Audible edition. “The world has collapsed, and there are no heroes any more.His name is Three, a travelling gun for hire in a dying world. He has no allegiances, no family, no ties.Against his better judgment, he accepts the mantle of protector to a sick woman on the run, and her young son. Together they set out across the plains in search of a mythic oasis, attempting to survive the forces that pursue them, and the creatures of the dark.In these dark times, a hero may yet arise.”

Again as they’re not on the “Daily Deals” list I don’t know how long some of these will last, or if they’re indeed just “regularly sale priced” going forward; anyway, SFSignal’s list of 330 science fiction, fantasy, and horror ebook titles under $3.99 includes a sizable list of Whispersync for Voice titles with sizable discounts, most of which are listed here along with Kindle + Audible prices: