for $1.99, a title which offers a $3.95 Whispersync for Voice upgrade to the Audible edition, read by Erik Bergmann for Harper Audio: 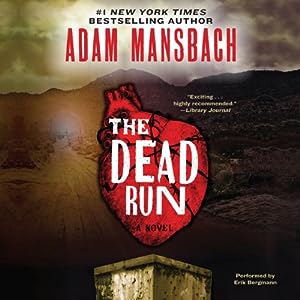 “Adam Mansbach, the acclaimed #1 New York Times best-selling author of Go the F**k to Sleep and Rage Is Back, turns to a new tale of suspense, horror, and supernatural action in The Dead Run. Wrongfully imprisoned in a Mexican jail, Jess Galvan, an outlaw-with-a-conscience, accepts a devil’s bargain: transport a sinister package across the border in twenty-four hours for the jail’s mythical – and terrifying – bogeyman El Cucuy. If Jess can make it across alive and give the iron box to cult leader Aaron Seth, he will be free and able to regain custody of his estranged daughter. But, as Jess navigates a blighted desert full of deadly surprises, girls go missing on both sides of the border and bodies begin to surface. It’s a deadly epidemic of crime that plunges small-town sheriff, Bob Nichols, into a monster of an investigation that he’s not equipped to handle, especially when sixteen-year-old Sherry disappears. An ancient evil has awoken in the empty wastelands along the border and now everyone – the innocent and the guilty alike – must face their deepest fears as epic myth and human malice combine to bring forth the end of the world as we know it. With The Dead Run, acclaimed author Adam Mansbach mixes horror, the supernatural, and suspense to deliver a chilling, high-octane adventure.”

This entry was posted in Whispersync Deals and tagged adam mansbach, erik bergmann, the dead run. Bookmark the permalink.