FEBRUARY 19-25, 2014: Well. This has been a hard release week to put together for a few reasons, mostly the sheer number of interesting titles and the difficulty in limiting the space for “picks”, but also I added about 100? or so more books into the “Coming Soon” listings, including the newly-announced The Peripheral by William Gibson, Margaret Killjoy’s A Country of Ghosts (no audio news but man does that book look interesting), an imminently forthcoming Blackstone Audio production of The King in Yellow, a very anticipated (for me at least!) non-fiction title, Green Planets: Ecology and Science Fiction, and almost literally tons more. Meanwhile, we’ve also finally published our picks for the best audiobooks of 2013, and put together a pretty sizable Whispsersync deal roundup. And! The AudioBookaneers turned 500 posts old just in time to celebrate PodCastle’s 300th fiction podcast. Not a bad week’s worth of work.

The big news in books this week of course is that the Nebula Awards finalists were announced, including 8 nominees for Best Novel, six of which are available in audio — and I’ve listened to all of them and picked all six among my favorite audiobooks of the year: We Are All Completely Beside Ourselves by Karen Joy Fowler; The Ocean at the End of the Lane by Neil Gaiman; Hild, by Nicola Griffith; Ancillary Justice by Ann Leckie;  A Stranger in Olondria by Sofia Samatar; and The Golem and the Jinni by Helene Wecker — and two yet (YET I SAY) to be, Fire with Fire by Charles E. Gannon and The Red: First Light by Linda Nagata.

Where we we? Ah yes. This week brings technothrillers, a fantasy debut, space sf, a crumbling sf future so byzantine it might? be fantasy, Aztec fantasy from a Nebula-nominated author, an armload of new audiobooks from the backlist of Dan Simmons, and collections from two legendary sf authors. The “also out” listings have so much to offer as well, from non-fiction (Michio Kaku’s The Future of the Mind) to fiction (The Wives of Los Alamos, Pioneer Girl) to more science fiction and fantasy (Matt Forbeck’s Amortals, Tricia Sullivan’s Dreaming in Smoke, Freya Robertson’s Heartwood) and urban fantasy (The Undead Pool) and horror (The Troop) than you could easily read this by summer. Enjoy!

Influx by Daniel Suarez narrated by Jeff Gurner for Penguin Audio, simultaneous with the print/ebook release from Dutton Adult. “Particle physicist Jon Grady is ecstatic when his team achieves what they’ve been working toward for years: A device that can reflect gravity. Their research will revolutionize the field of physics – the crowning achievement of a career. Grady expects widespread acclaim for his entire team. The Nobel Prize. Instead, his lab is locked down by a shadowy organization whose mission is to prevent at all costs the social upheaval sudden technological advances bring.” Already reviewed very positively by The Guilded Earlobe as “a nano-infused balls to the wall thriller that will spin your genetically enhanced brain while causing your artificial cyber heart to beat a kilometer a minute keeping the tension building like a fusion powered perpetual motion machine”. 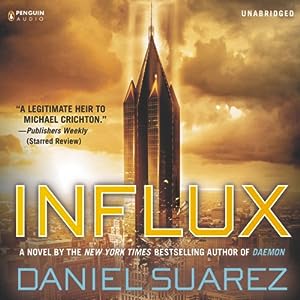 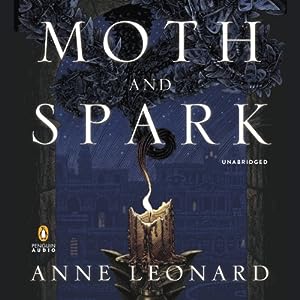 Moth and Spark by Anne Leonard, narrated by Christian Coulson for Penguin Audio. “Prince Corin has been chosen to free the dragons from their bondage to the Empire, but dragons aren’t big on directions. They have given him some of their power, but none of their knowledge. No one, not the dragons nor their riders, is even sure what keeps the dragons in the Empire’s control. Tam, sensible daughter of a well-respected doctor, had no idea before she arrived in the capital that she is a Seer, gifted with visions. When the two run into each other (quite literally) in the library, sparks fly and Corin impulsively asks Tam to dinner. But it’s not all happily ever after.”

Rachel Bach’s genre-smashing 2013 novel Fortune’s Pawn provided a winning mix of space sf, adventure sf, and military sf, with a helping of romance. Bach, also the author (as Rachel Aaron) of the thief fantasy The Legend of Eli Monpress, is back with Honor’s Knight, book 2 in her Paradox series, read by Emily Durante for Tantor concurrent with the print/ebook release from Orbit. “Devi Morris has a lot of problems, and not the fun, easy-to-shoot kind either. After a mysterious attack left her short several memories and one partner, she’d determined to keep her head down, do her job, and get on with her life. But even though Devi’s not actually looking for it this time, trouble keeps finding her. She sees ghostly creatures no one else can, the inexplicable black stain on her hands keeps getting bigger, and she can’t seem to stop getting into compromising situations with a man she’s supposed to hate. But when a deadly crisis exposes far more of the truth than she bargained for, Devi discovers there are worse fates than being shot, and sometimes the only people you can trust are the ones who want you dead. ” I’m using the Orbit book cover below because the Tantor cover is … unfortunate. Book three is due April 22. 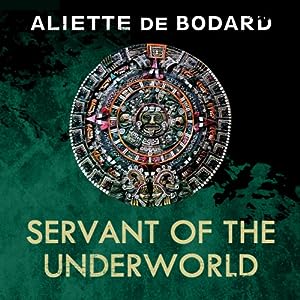 Servant of the Underworld: Obsidian and Blood, Book 1 by Aliette de Bodard, narrated by John Telfer for Audible Ltd, with books two and three coming in the next weeks. Author de Bodard just received a Nebula nomination for her novelette “The Waiting Stars” (from the Athena Andreadis-edited anthology The Other Half of the Sky), but, channeling my inner hipster, “I’ve been reading her for a while now” thanks to being introduced to her by way of Dario Ciriello’s anthology Eight Against Reality. I’ve been hoping for this series to come to audio since they started appearing from Angry Robot back in 2010, and luckily, we all survived the end of the Mayan calendar. Will we survive the Aztecs? “Year One-Knife, Tenochtitlan – the capital of the Aztecs. The end of the world is kept at bay only by the magic of human sacrifice. A priestess disappears from an empty room drenched in blood. Acatl, high priest, must find her, or break the boundaries between the worlds of the living and the dead. But how do you find someone, living or dead, in a world where blood sacrifices are an everyday occurrence and the very gods stalk the streets?”

City of Dreams & Nightmare: City of a Hundred Rows, Book 1 By Ian Whates, Narrated By Mark Meadows for Audible Ltd. “They call it “The City of a Hundred Rows”. The ancient city of Thaiburley is a vast, multi-tiered metropolis. The poor live in the City Below and demons are said to dwell in the Upper Heights. Having witnessed a murder in a part of the city he should never have been in, street thief Tom has to run for his life. Down through the vast city he is pursued by sky-borne assassins, sinister Kite Guards, and agents of a darker force intent on destabilizing the whole city.” Book two actually was released last week, and this week also brings City of Light and Shadows: City of a Hundred Rows, Book 3. 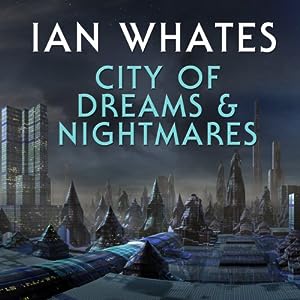 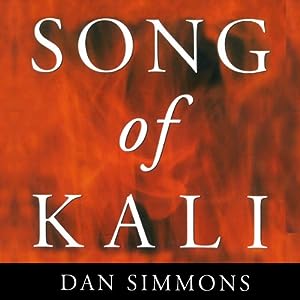 Four novels by Dan Simmons: Olympos and Ilium, Narrated By Kevin Pariseau, and The Hollow Man and Song of Kali, Narrated By Mark Boyett. All four books have their champions, but here I’ll focus on Song of Kali, winner of the World Fantasy Award: “Blood will curdle in Calcutta. In the most crime-ridden city, nightmares become real and evil is defined by frightening occurrences. When an American family finds themselves encircled by the terrors of this land, lurid events befall them and life takes on a new meaning – death.”

Lastly this week, two collections from two of science fiction’s most beloved authors, both read by David Marantz for Audible Frontiers. First up, War Stories by Joe Haldeman. “An omnibus of Joe Haldeman’s war stories, this will be an important book that gives massive insight into Vietnam from the perspective of one of the finest science fiction writers in the field. Includes the stories “War Year”, “1968”, “Time Piece”, “The Private War of Private Jacob”, “To Howard Hughes: A Modest Proposal”, “The Monster”, “Graves”, “A Separate War”, and “Giza”. Plus the long narrative poems “Saul’s Death” and “DX”, as well as three essays by Haldeman about his experiences in Vietnam and about writing “The Forever War”, “1968”, “War Year”, and short fiction.” 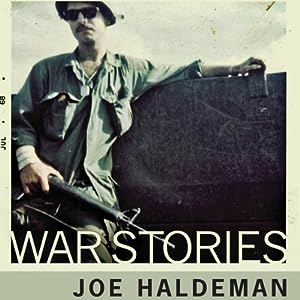 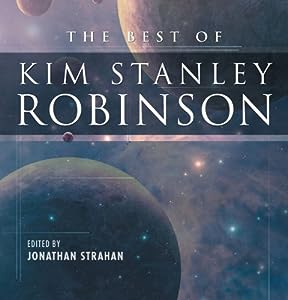 And: The Best of Kim Stanley Robinson by Kim Stanley Robinson. “Adventurers, scientists, artists, workers, and visionaries – these are the men and women you will encounter in the short fiction of Kim Stanley Robinson. In settings ranging from the sunken ruins of Venice to the upper reaches of the Himalayas to the terraformed surface of Mars itself, and through themes of environmental sustainability, social justice, personal responsibility, sports, adventure, and fun, Robinson’s protagonists explore a world which stands in sharp contrast to many of the traditional locales and mores of science fiction, presenting instead a world in which Utopia rests within our grasp.” 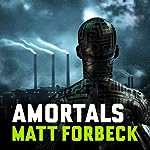 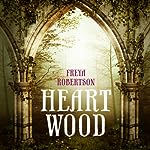 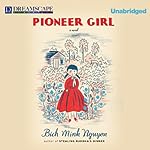 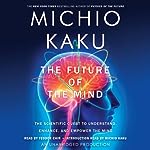 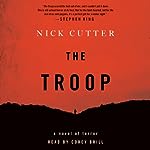 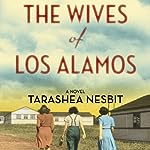 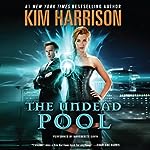 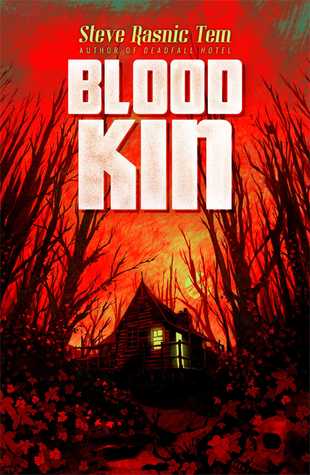 One Response to Release Week: Influx, Moth and Spark, Honor’s Knight, Servant of the Underworld, City of a Hundred Rows, Dan Simmons, and collections from Kim Stanley Robinson and Joe Haldeman