Well, this is unexpected. I’ve just exchanged emails with a delighted Ellen Kushner and confirmed it: Swordspoint will become a major motion picture, to be directed by Brett Ratner. 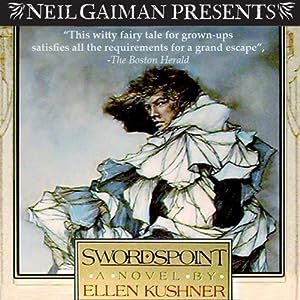 Kushner did caution that the film wouldn’t be a direct adaptation of her novel. Instead, the synopsis goes like this:

While serving in Afghanistan, Lt. Richard “Saint” Vier, is plagued with dreams of another world where nobles hire swordsmen to duel in the streets on behalf of their honor, and a prophecy of Basel St. Cloud. When he’s wounded in the line of duty, the dreams overwhelm Richard, and he wakes up in Riverside – the world of his dreams! He’s immediately called upon to defend the honor of the beautiful Katherine Tremontaine. Together, with the help of smooth talking Alec Campion (who may not be everything he appears to be) they learn of the prophecy made by Basil St. Cloud that a chosen one will appear from a world of dreams to find the legendary sword Excalibur, and lead a revolution to take down the government once and for all. But time is running out. The Evil Lord Ferris has also heard of Excalibur, and he will stop at nothing to claim it.

Apparently, one of the producers is a big fan of Neil Gaiman, and was hoping to cast him in the role of Basil St. Cloud. But then the production company found out they could get Bill Clinton for that much money, so they did. Katherine will be played by Megan Fox, Alec will be performed by Josh Holloway, and Lord Ferris will be performed by Val Kilmer (okay, I guess that one could work). Amazingly, the role of Richard St. “Saint” Vier has yet to be cast.

Uh, who would you pick?

This entry was posted in April 1 and tagged ellen kushner, swordspoint. Bookmark the permalink.