MARCH 26-APRIL 1, 2014: A fantastic range of releases this week, from a 2012-UK-published novel of mind-bending interplanetary science fiction finally getting a US release, to epic fantasy, a big-name paranormal fantasy anthology, post-apocalyptic sf, to near-future sf for young/new adults, and some long-missing audiobooks from Ian McDonald’s backlist. Also out this week: Scott Sigler’s Galactic Football League, Steven Erikson’s The Bonehunters (Book 6 in his Malazan Book of the Fallen), a new audiobook edition of David Saperstein’s sf classic Cocoon, Lemony Snicket, fiction novels Frog Music and Every Day is For the Thief, and more. There are also some fantastic-looking books in the “seen but not heard” listings, including Felix Gilman’s The Revolutions, Katherine Addison’s The Goblin Emperor, and Teodor Reljic’s Two, along with a pair of essay collections as well: Battle Royale Slam Book, and the Gerry Canavan and Kim Stanley Robinson-edited essay anthology Green Planets: Ecology and Science Fiction. Lastly, a bit of administrivia to take care of here: I’ve been copypasting the full “coming soon” listings like a massive, unending hydrocarbon chain every week, and otherwise not saying much about what’s going on down there. With this week, I’m starting a new routine of identifying new entries of interest. This week’s additions are headlined by a new Kingkiller Chronicle novella from Patrick Rothfuss, “The Slow Regard of Silent Things”, due out in November, and Nightmare Carnival edited by Ellen Datlow, due out in October. Meanwhile, the big non-release audiobook news for me is the casting of Monica Byrne’s The Girl in the Road with narrators Dioni Collins and Nazneen Contractor, and the big book news of the week is the announcement of a new series from Tad Williams, continuing his beloved “Memory, Sorry, Thorn” series. Enjoy!

Dark Eden: A Novel by Chris Beckett, narrated by Matthew Frow, Jayne Entwistle, Ione Butler, Robert Hook, Heather Wilds, Nicholas Guy Smith, Hannah Curtis, and Bruce Mann (April 1) is a BSFA-nominated 2012 novel which came strongly recommended to me from Steven Erikson, and I’ve been looking for a US release ever since. Well, here it is, given a full cast treatment by Random House Audio. “On the alien, sunless planet they call Eden, the 532 members of the Family shelter beneath the light and warmth of the Forest’s lantern trees. Beyond the Forest lie the mountains of the Snowy Dark and a cold so bitter and a night so profound that no man has ever crossed it. The Oldest among the Family recount legends of a world where light came from the sky, where men and women made boats that could cross the stars. These ships brought us here, the Oldest say – and the Family must only wait for the travelers to return.” 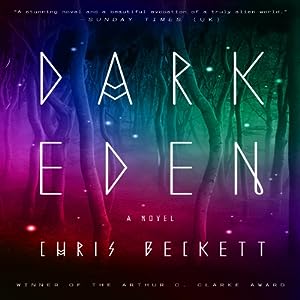 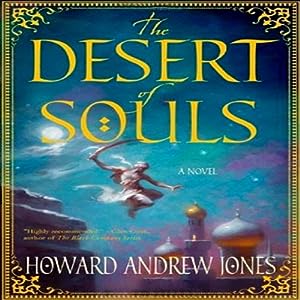 The Desert of Souls: Dabir & Asim, Book 1 by Howard Andrew Jones is the author’s 2011 sword-and-sorcery debut set in 8th century Baghdad, also at long last in audio, read by Peter Ganim for Audible. “In 8th-century Baghdad, a stranger pleads with the vizier to safeguard the bejeweled tablet he carries, but he is murdered before he can explain. Charged with solving the puzzle, the scholar Dabir soon realizes that the tablet may unlock secrets hidden within the lost city of Ubar, the Atlantis of the sands. When the tablet is stolen from his care, Dabir and Captain Asim are sent after it, and into a life-and-death chase through the ancient Middle East. Stopping the thieves – a cunning Greek spy and a fire wizard of the Magi – requires a desperate journey into the desert, but first Dabir and Asim must find the lost ruins of Ubar and contend with a mythic, sorcerous being that has traded wisdom for the souls of men since the dawn of time. But against all these hazards there is one more that may be too great even for Dabir to overcome….”

Reign of Ash is Book Two in the Ascendant Kingdoms Saga by Gail Z. Martin, out in print/ebook from Orbit and concurrently in audio from Recorded Books read by Tim Gerard Reynolds. A follow-on to Ice Forged, Reign of Ash (excerpt) continues the story of Blaine McFadden, “the last living Lord of the Blood, endured six years in the brutal Velant prison colony, exiled for murder”, who has returned “to a lawless wasteland, where unrestrained magic storms wreak havoc and monsters roam the ruins.” Reynolds is as always a fantastic narrator, particularly well cast in epic fantasy (as he is on Michael J. Sullivan’s Riyria books) and there’s no exception to that here. Games Creatures Play edited by Charlaine Harris and Toni L. P. Kelner, narrated by Todd Haberkorn and Kate Rudd for Brilliance Audio, is a new paranormal fantasy anthology with authors both familiar to that genre (Charlaine Harris, Seanan McGuire) and ones with a bit less experience there (Brandon Sanderson) all taking a look at sports and games. “Welcome to the wide world of paranormal pastimes, where striking out might strike you dead. Editors Charlaine Harris and Toni L. P. Kelner are your announcers for this all-new story collection of the most peculiar plays ever made. Sports fans live and die by their teams’ successes and failures—though not literally. But these fourteen authors have written spirited—in more ways than one—new tales of killer competitions that would make even the most die-hard players ask to be benched.”

Tales of the Radiation Age by Jason Sheehan, read by Nick Podehl (Brilliance Audio, March 26, 2014) was published first as a Kindle Serial in 2013 and came to paperback in late February 2014 from 47North. While I wasn’t the most blown away by Sheehan’s A Private Little War, his recent non-fiction (reviews for NPR in particular) have me interested in checking him out again, and with narrator Podehl at the helm, all the more interested. “In a post-apocalyptic America that has shattered into a hundred perpetually warring fiefdoms, anyone with a loud voice and a doomsday weapon can be king (and probably has been). Duncan Archer—con man, carpetbagger, survivor—has found a way to somehow successfully navigate the end of the world, with its giant killer robots, radioactive mutants, mad scientists, rampant nanotechnology, armed gangs, sea monsters, and 101 unpleasant ways to die.” 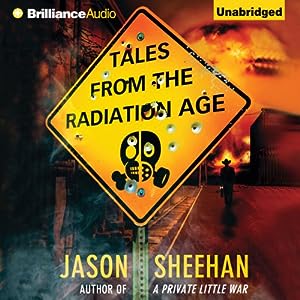 Salvage by Alexandra Duncan is the Asheville, NC author’s debut — though she’s quite familiar to readers of short fiction through her stories in F&SF — out from Greenwillow, a YA imprint of HarperCollins, and read by Johanna Parker for Harper Audio. “A thrilling, surprising, and thought-provoking debut novel that will appeal to fans of Across the Universe, by Beth Revis, and The Handmaid’s Tale, by Margaret Atwood. This is literary science fiction with a feminist twist, and it explores themes of choice, agency, rebellion, and family. Ava, a teenage girl living aboard the male-dominated, conservative deep space merchant ship Parastrata, faces betrayal, banishment, and death. Taking her fate into her own hands, she flees to the Gyre, a floating continent of garbage and scrap in the Pacific Ocean. This is a sweeping and harrowing novel about a girl who can’t read or write or even withstand the forces of gravity. What choices will she make? How will she build a future on an earth ravaged by climate change? Named by the American Booksellers Association as a Spring 2014 Indies Introduce Pick.” I’m less familiar with narrator Parker than many listeners will be — she’s been the voice of Charlaine Harris’ Sookie Stackhouse series for more than a decade.

Lastly, Irish sf author Ian McDonald’s backlist has been getting quite the audiobook workout already this year, and this week brings both Cyberabad Days — his 2009 collection of short fiction set in the India of 2047 — and his two Mars-set “Desolation Road” novels to audio. First, Cyberabad Days, narrated by Jonathan Keeble: “The world: ‘Cyberabad’ is the India of 2047, a new, muscular superpower of one and a half billion people in an age of artificial intelligences, climate-change induced drought, water-wars, strange new genders, genetically improved children that age at half the rate of baseline humanity and a population where males out-number females four to one. India herself has fractured into a dozen states from Kerala to the headwaters of the Ganges in the Himalayas.” 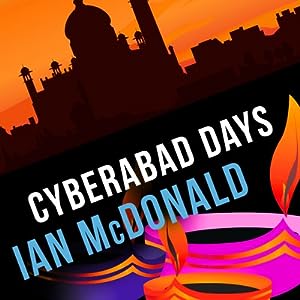 McDonald’s Desolation Road was first published in 1988, winning the Locus Poll Award for best first novel and nominated for the Arthur C. Clarke Award after its UK publication in 1989. Re-published in 2009 by editor Lou Anders at Pyr (with the amazing new covers above, by Stephan Martiniere, sadly the audiobook covers from Audible are really quite sub-par) they’re finally in audio, with Desolation Road read by David Thorpe and Ares Express read by Lorna Bennett. “It all began thirty years ago on Mars, with a greenperson. But by the time it all finished, the town of Desolation Road had experienced every conceivable abnormality from Adam Black’s Wonderful Travelling Chautauqua and Educational ‘Stravaganza (complete with its very own captive angel) to the Astounding Tatterdemalion Air Bazaar. Its inhabitants ranged from Dr. Alimantando, the town’s founder and resident genius, to the Babooshka, a barren grandmother who just wants her own child—grown in a fruit jar; from Rajendra Das, mechanical hobo who has a mystical way with machines to the Gallacelli brothers, identical triplets who fell in love with—and married—the same woman.”