Wednesday, April 9, 2014: Today’s Kindle Daily Deal is Bill Johnston’s “definitive” 2011 translation of Stanislaw Lem’s classic 1961 sf novel Solaris. “Telling of humanity’s encounter with an alien intelligence on the planet Solaris, the 1961 novel is a cult classic, exploring the ultimate futility of attempting to communicate with extra-terrestrial life.” On sale for $0.99 and offering a $1.99 Whispersync for Voice upgrade to the Audible edition, read by Battlestar Galactica’s Alessandro Juliani for Audible, which commissioned the new (and first direct to English) translation to mark the 50th anniversary of the novel’s release. 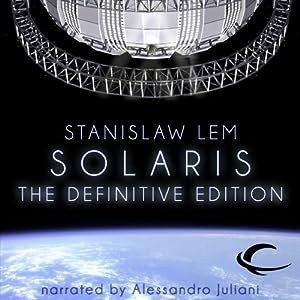 “When Kris Kelvin arrives at the planet Solaris to study the ocean that covers its surface, he finds a painful, hitherto unconscious memory embodied in the living physical likeness of a long-dead lover. Others examining the planet, Kelvin learns, are plagued with their own repressed and newly corporeal memories. The Solaris ocean may be a massive brain that creates these incarnate memories, though its purpose in doing so is unknown, forcing the scientists to shift the focus of their quest and wonder if they can truly understand the universe without first understanding what lies within their hearts.”