APRIL 9-15, 2014: After two massive release weeks in a row, we get a bit of a breather here in terms of overall numbers, but a half-dozen fantastic titles make for another week of hard choices for those without infinite time for listening. The ALSO OUT listings have a few items of interest as well, particularly Frank Herbert’s Direct Descent read by Scott Brick, Matthew Costello’s post-apocalyptic horror novel Home, Shae Ford’s Slight and Shadow, and a wide selection of teen and middle grade titles, including Geoff Rodkey’s Blue Sea Burning. In SEEN BUT NOT HEARD this week there are a few enticing books as well, including Rjurik Davidson’s debut novel Unwrapped Sky and Django Wexler’s first middle grade novel, The Forbidden Library. In publishing news this week, three items of interest to pass along: 1. The table of contents for the Nick Mamatas-edited anthology Phantasm Japan (Haikasoru, Sep 16) has been revealed; author(s) James S.A. Corey talk about the recent announcement of a TV series based on his/their “Expanse” series; and Sarah Chorn (a.k.a. BookwormBlues) will be collaborating on a shared world novel set in “The Shattered Worlds” universe for Antimatter Press. Meanwhile, I’ve recently torn through Off To Be the Wizard (what a great year for funny business 2014 has been!) and have been glued by the ears to Claire North’s The First Fifteen Lives of Harry August since starting into it last night. Fun stuff abounds. Enjoy!

Lagoon By Nnedi Okorafor is the World Fantasy Award winning author’s first novel for adults since 2010’s Who Fears Death. Narrated By Ben Onwukwe (known for his role in London’s Burning) and Adjoa Andoh (known for her roles in Dr. Who and EastEnders) for Hodder & Stoughton, the audiobook is really well done. Onwukwe handles most of the mainline narration, with Andoh providing the introduction and filling in for a few vignettes — an extract of the audiobook on HodderPod gives the first of these, from the point of view of a swordfish — as well as providing all of the female voices “inline” with Onwukwe’s reading. Both narrators display quite a range, from multiple “American” accents to diverse African (Nigeria, Ghana, pidgin English) to British ex-pats and more; from simple dialogue to guttural screams, both actors give fantastic performances. At first, the “inline” insertions are a bit jarring, but as the audiobook progresses it becomes more natural and seamless to the ear. Inspired by “Wizard of the Crow, Under the Dome (the novel), Nollywood movies, and District 9”, Lagoon is a story of first alien contact, Lagos, Nigeria, and (principle among the protagonists) Adaora, a marine biologist. Okorafor’s aliens are different — upon high-magnification examination, Adaora discovers that they are not composed of cellular material at all, but rather billions of tiny metallic crystals — who can shapeshift, read thoughts, and are quite serious when they say that they bring “change” — a keyword refrain that I read as an homage to Octavia Butler’s Parable of the Sower. Written with a cinematic sensibility, along with the primary thrust of the story (Adaora, rapper Anthony, and soldier Agu trying desperately amidst the chaos of rioting Lagos to bring alien ambassador Ayodele together with the popular but ineffective Nigerian president) there are many, many sub-plots afoot, from a “born-again” church’s bishop hoping to use Ayodele, to small-time 419 scammers preparing to upgrade to kidnapping, to (as is perhaps a defining characteristic of Okorafor’s work to date) the intersection of science fiction and mythology: ghosts, gods, trees, animals, the ocean itself. Highly recommended. 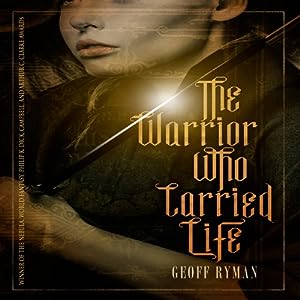 The Warrior Who Carried Life By Geoff Ryman, Narrated By Patrice O’Neal for Audible Studios (April 10) — Ryman’s 1985 debut epic mythological fantasy novel was lovingly re-released by ChiZine Press in 2013, and now comes to audio. I have had a daily search for Ryman’s books in audio since being strongly recommended him by John Kessel, and finally that patience has been rewarded: “To defeat her enemies she must make them immortal. Only men are allowed into the wells of vision. But Cara’s mother defies this edict and is killed, but not before returning with a vision of terrible and wonderful things that are to come… and all because of five-year-old Cara. Years later, evil destroys the rest of Cara’s family. In a rage, Cara uses magic to transform herself into a male warrior. But she finds that to defeat her enemies, she must break the cycle of violence, not continue it. As Cara’s mother’s vision of destiny is fulfilled, the wonderful follows the terrible, and a quest for revenge becomes a quest for eternal life.”

Hollow World by Michael J. Sullivan was originally Kickstarter-funded, then officially released just a bit early in print/ebook by Tachyon. Finally (though, admittedly, on the long-announced release date) the audiobook edition is here, read by Jonathan Davis for Recorded Books. While on the one hand I’m sad to see a Sullivan title not read by Tim Gerard Reynolds (who has read all of Sullivan’s epic fantasy Riyria books), on the other hand: Jonathan Davis! whom I’ve enjoyed immensely on a long list of audiobooks, giving an instantly and dramatically different flavor to this first science fiction novel from best-selling fantasist Sullivan. “The future is coming … for some, sooner than others. Ellis Rogers is an ordinary man who is about to embark on an extraordinary journey. The fifty-eight-year-old ex–auto factory worker has played it safe all his life. But when he is faced with a terminal illness and has nothing left to lose, Ellis takes an insane gamble on a reckless plan. He has built a time machine in his garage, and intends to use it to search for a cure for his disease in the future. If it works, he’ll face a world that challenges his understanding of what it means to be human, what it takes to love, and the cost of paradise. He could find more than a cure; he might find what everyone has been searching for since time began … but only if he can survive the Hollow World.”

More near-future, thriller-paced science fiction, you say? Transhuman by Ben Bova, read by Stefan Rudnicki for Blackstone Audio is also out this week: “Luke Abramson, a brilliant cellular biologist who is battling lung cancer, has one joy in life: his ten-year-old granddaughter, Angela. When Angela is diagnosed with an inoperable brain tumor and given less than six months to live, Luke wants to try a new enzyme, Mortality Factor 4 (MORF4), that he believes will kill Angela’s tumor. However, the hospital bureaucracy won’t let him do it because MORF4 has not yet been approved by the FDA. Knowing Angela will die before he can get the treatment approved, Luke abducts her from the hospital with plans to take her to a private research laboratory in Oregon.”

Jay Lake’s 2010 short fiction collection  The Sky That Wraps: Collected Short Fiction comes to audio, narrated by Katherine Kellgren, Jonathan Davis, and Stephen Bel Davies for Audible, along with each story’s individual release for those who want to pick and choose. “This collection of short fiction from award winning-author Jay Lake represents his favorites of his own work, both current and classic. With an emphasis on recent publications since his last short fiction collection, in 2007, The Sky That Wraps showcases his reach in fantasy, science fiction, and the ambiguous territory in between. This volume includes two all-new stories, “Coming for Green” and “To Their Late Escape”, as well as previously uncollected fan favorites “The American Dead” and “The Sky That Wraps The World Round, Past the Blue and Into the Black”. Twenty other stories round out this wide-ranging survey of Lake’s work.” 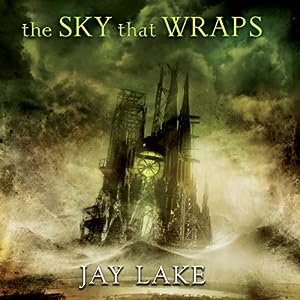 And! Though I included it the March 12-18 column already, Homeland by Cory Doctorow, read by Wil Wheaton, is now more generally available. Previously available only as an exclusive reward for a Humble Bundle, the Gabrielle de Cuir-directed and Skyboat Media recorded audiobook has now been released by Blackstone Audio at their DRM-free Downpour.com store as well, with CD and MP3-CD physical formats still on the way. I thoroughly enjoyed this sequel to Little Brother, from Burning Man to hackerspaces to Wil Wheaton name-dropping himself and reading the first (quite a great many) digits of pi to… Well, it’s Doctorow, right? Digital freedom, political conspiracies, and more, in one of Wheaton’s most dynamic performances. “In Cory Doctorow’s wildly successful novel Little Brother, young Marcus Yallow was arbitrarily detained and brutalized by the government in the wake of a terrorist attack on San Francisco—an experience that led him to become a leader of the whole movement of technologically clued-in teenagers, fighting back against the tyrannical security state. A few years later, California’s economy collapses, but Marcus’ hacktivist past lands him a job as webmaster for a crusading politician who promises reform. Soon his former nemesis Masha emerges from the political underground to gift him with a thumb drive containing a WikiLeaks-style cable dump of hard evidence of corporate and governmental perfidy. It’s incendiary stuff—and if Masha goes missing, Marcus is supposed to release it to the world. Then Marcus sees Masha being kidnapped by the same government agents who detained and tortured Marcus years earlier.” 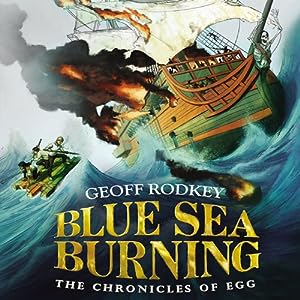 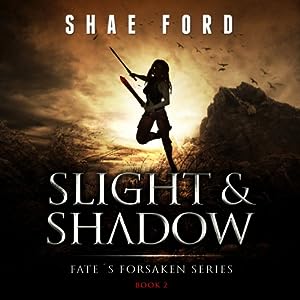 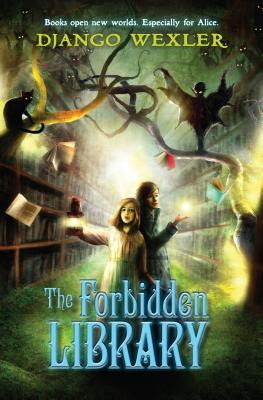