Whispersync Daily Deal: The Cloud Roads, Book 1 of The Books of the Raksura by Martha Wells

Tuesday April 29, 2014: One Kindle Daily Deal title today of interest, The Cloud Roads (The Books of the Raksura) by Martha Wells, the first book in a trilogy. Originally published in March 2011 by Night Shade Books, it’s on sale for $1.99 in Kindle with a $1.99 Whispersync for Voice upgrade to the Audible edition, performed by Christopher Kipiniak for Audible Frontiers, which was released later that year. At under $4 for a bit over 15 hours in (highly-recommended!) audio, it’s a very good time to dip into this deep and dark secondary world fantasy — or, depending on how you read it, deeply alien sf? In a starred review, Publishers Weekly says: “Wells…merrily ignores genre conventions as she spins an exciting adventure around an alien hero who anyone can identify with.” There’s a good bit of coming-of-age here, but it’s also a good bit darker than most things marketed as YA (which this isn’t). 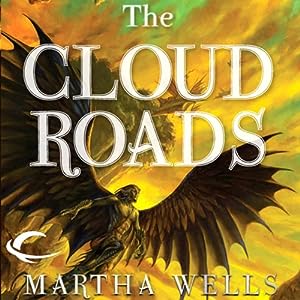 “Moon has spent his life hiding what he is – a shape-shifter able to transform himself into a winged creature of flight. An orphan with only vague memories of his own kind, Moon tries to fit in among the tribes of his river valley, with mixed success. Just as Moon is once again cast out by his adopted tribe, he discovers a shape-shifter like himself… someone who seems to know exactly what he is, who promises that Moon will be welcomed into his community. What this stranger doesn’t tell Moon is that his presence will tip the balance of power… that his extraordinary lineage is crucial to the colony’s survival… and that his people face extinction at the hands of the dreaded Fell! Now Moon must overcome a lifetime of conditioning in order to save himself – and his newfound kin.”

This entry was posted in Whispersync Deals and tagged christopher kipiniak, martha wells, the cloud roads. Bookmark the permalink.