Saturday, May 3, 2014: Remember two days ago in the monthly Whispersync roundup when I said that I wouldn’t be doing daily deals with full write-ups on the blog? Well, I lied. Because sometimes there will be a title I think so highly of that I just have to write a bit more about it. Today’s Kindle Daily Deal is Zachary Jernigan’s No Return: A Novel of Jeroun, at $1.99, and there’s a $1.99 Whispersync for Voice upgrade to the Audible edition, performed by John FitzGibbon for Audible Frontiers. 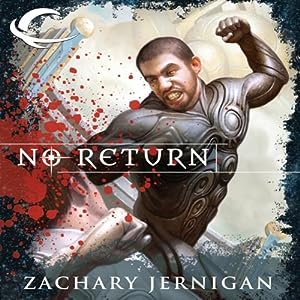 I was blown away by this imaginative, dark fantasy debut both as a story and as a performance. In my review last April I called it “A stunning and original debut fantasy” and wrote the following, with which I still whole-heartedly agree:

In a crowded year of strong debut fantasy novels, “No Return” is a very strong contender. Beginning with an assured voice, a prologue of a pitiless landscape of an hallucinogenic salt lake, expanding out to a world whose currency is the powdered skin of an Elder race, populated by (among others) rival enclaves of warrior monks engaging in ritualized battles to defend and proselytize their competing faiths. There is a god with city-killing orbital kinetic ordinance at his whim; there are deeply weird and sexualized alchemistic magics; there are sentient constructs of magical metal spheres; there are dragons and ghosts.The narrative is split along 5 principle points of view in a rotating fashion, across two primary storylines. In the first, it is a ‘journey’ narrative, in which we meet the three companions who form a bond as they travel to a massive gladiatorial tournament. These three are 1. a warrior monk, 2. a female sell-sword, and 3. a construct. In the other, it is a more political/academic setting of advanced magical research, and the power struggles (and competing lusts) of a senior mage and one of her more junior colleagues with experimental theories. These “outbound mages” make excursions to space, to observe the god and take measurements of his “spheres” — the two smallest of which had been used centuries before to demonstrate the planet-killing power at hand.The world builds and deepens and widens; the journey narrative treks us through disparate peoples and landscapes and histories, developing the characters and (through flashbacks) providing back stories as well. Throughout there’s always the atmosphere of a deeper world at work, at mysteries not yet revealed. Who is the god Adrash, what does he want? Building toward dual climaxes in both narratives and powering on into denouement and stage-setting for a sequel, a lengthy epilogue serves to further widen the mysteries of this world by another deep breath. All in all, a very strong, no-holds-barred and emotionally impactful debut novel by Jernigan, whose short fiction I have followed on and off through M-BRANE SF and Asimov’s. His is a bold, determined voice, with a razor’s edge balance of rawness and assuredness; each character’s point of view was distinct and fully realized. This is absolutely an heroic fantasy novel not to be missed.I had never heard of the narrator John FitzGibbon before; presumably he was found by Audible through taking on stipend-eligible ACX titles. In any case he appears to be a US stage actor, and this training serves him exceedingly, exceedingly well. There are some passages of potentially uncomfortable content, from eviscerating violence to explicit sexual encounters. FitzGibbon does not shy away from any of these, nor over-emphasize in a campy way. His voices for each character are solid and distinct, bringing accents which accentuate the character’s backgrounds. In particular his voice for the construct, Berun, is as outstanding a character voice as you’ll find in audio.Highly recommended.

So: do check it out. You’ve got a little more than twelve hours, tick-tock. Meanwhile, Jernigan’s follow-on novel, Shower of Stones, was just signed to Night Shade Books (*), so there’s more novels of Jeroun coming. And, hey, Night Shade, while I’m at it, how about a Kindle Daily Deal soon for J.M. McDermott’s Never Knew Another and Kameron Hurley’s God’s War?

(*) Shower of Stones by Zachary Jernigan (Night Shade Books, Spring 2015) — “Conclusion to the visceral, inventive narrative begun in No Return, ‘the most daring debut novel of 2013,’ Shower of Stones pits men against gods, swords against world-destroying magic, offering readers another glimpse into the fascinatingly harsh world of Jeroun.”

This entry was posted in Whispersync Deals and tagged john fitzgibbon, no return, zachary jernigan. Bookmark the permalink.