SEPTEMBER 3-9, 2014: A highly-praised post-apocalyptic fiction, a secondary-world fantasy, an optimistic hard sf anthology, a young adult fantasy anthology, and an “all ages” fantasy lead a crowded week which also includes Daryl Gregory’s “dark, degenerate, and sublime” We Are All Completely Fine, Karen Miller’s The Falcon Throne, Angus Watson’s Age of Iron, Siobhan Adcock’s ghost story The Barter, Paula Guran’s anthology Zombies: More Recent Dead, Benedict Cumberbatch reading William Golding’s The Spire, and the first two books in David Gerrold’s War Against the Chtorr. Speaking of series, Steven Gould’s Jumper series continues with Exo and Kim Harrison’s Hollows series concludes with The Witch with No Name. And it’s a packed week in the “seen but not heard” listings as well, with (among others) Nancy Kress’s Yesterday’s Kin, etc. Jonathan Wood’s Yesterday’s Hero, D. Harlan Wilson’s Primordial: An Abstraction, M.C. Planck’s Sword of the Bright Lady, Benjamin Parzybok’s Sherwood Nation, Darin Bradley’s Chimpanzee, and Stephen Graham Jones’ collection After the People Lights Have Gone Off, and Laila Lalami’s historical fiction The Moor’s Account. In terms of news and links and such, as usual there’s news a-plenty. Last week I shared the official announcement that Patrick Rothfuss would be narrating his forthcoming novella, and this week I’ll link to another read by the author title to look forward to soon: John Darnielle’s narration of Wolf in White Van is pretty fantastic. In other news and links, narrator Luke Daniels shared A Brief History of Talking Books for the Blind and Recorded Books answered Tantor’s ALS Ice Bucket Challenge with aplomb. Meanwhile, as I detailed as part of the September Whispersync Roundup (which has since been updated to include a few more deals) Audible’s Win-Win Sale ends on September 18. All right! Get listening! By the time you read this, The Rabbit Back Literature Society, Lauren Beukes’ Broken Monsters, and Jay Lake’s Last Plane to Heaven will all be out. Enjoy… Station Eleven by Emily St. John Mandel (Knopf and Random House Audio) “is Millions staff writer Emily St. John Mandel’s fourth novel, and if pre-publication buzz is any indication, it’s her best, most ambitious work yet. Post-apocalyptic tales are all the rage this season, but Mandel’s intricate plotting and deftness with drawing character makes this novel of interlinked tales stand out as a beguiling read. Beginning with the onslaught of the deadly Georgian flu and the death of a famous actor onstage, and advancing twenty years into the future to a traveling troupe of Shakespearean actors who perform for the few remaining survivors, the novel sits with darkness while searching for the beauty in art and human connection.” (via The Millions) Narrated by Kirsten Potter, this title has slowly bubbled its way up my expectations list for this week, finally earning the #1 spot by dint of an intriguing interview and fantastic excerpts (both a text excerpt up at EW and the now-available audiobook samples) and, most of all, honestly, praise from The Guilded Earlobe, of the “best listen of the year” kind. Get: [Downpour | Audible]

City of Stairs by Robert Jackson Bennett (Crown/Broadway and Recorded Books) is “a second-world story of spies, subterfuge, and statesmanship set in a nation of dead gods.” Both Dave and I loved RJB’s previous novel American Gods, and this is another one I’ve been looking forward to all year. Narrated By Alma Cuervo who is new to me, I’m really looking forward to seeing where Bennett has taken his “contemporary Weird” sensibility in this leap to secondary world fantasy. More: Tor.com, Bookworm Blues. Get: [IndieBound | Audible | Amazon] 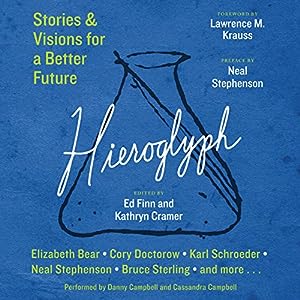 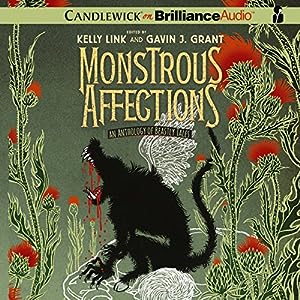 Next up, two anthologies, starting with Hieroglyph: Stories and Blueprints for a Better Future edited by Ed Finn and Kathryn Cramer (William Morrow and Harper Audio) — in reference to Neal Stephenson’s “Hieroglyph” challenge/project, to inspire tech and science research with grand sf stories, this anthology comes with both a preface and story by Stephenson, joined by Elizabeth Bear, Cory Doctorow, Karl Schroeder, Bruce Sterling, Gregory Benford, and more than a dozen more writers, under the flag of “contribute works of ‘techno-optimism’ that challenge us to dream and do Big Stuff. Engaging, mind-bending, provocative, and imaginative, Hieroglyph offers a forward-thinking approach to the intersection of art and technology that has the power to change our world.” Narrated By Danny Campbell and Cassandra Campbell. More: Stephenson interviewed by the BBC. Get: [Downpour | Audible]

Monstrous Affections: An Anthology of Beastly Tales is edited by Kelly Link and Gavin J. Grant (Candlewick and Candlewick on Brilliance Audio) — “Predatory kraken that sing with – and for – their kin; band members and betrayed friends who happen to be demonic; harpies as likely to attract as to repel. Welcome to a world where humans live side-by-side with monsters, from vampires both nostalgic and bumbling, to an eight-legged alien who makes tea. Here you’ll find mercurial forms that burrow into warm fat, spectral boy toys, a Maori force of nature, a landform that claims lives, and an architect of hell on earth. Through these, and a few monsters that defy categorization, some of today’s top young-adult authors explore ambition and sacrifice, loneliness and rage, love requited and avenged, and the boundless potential for connection, even across extreme borders. As in their acclaimed and award-winning anthology Steampunk!, Kelly Link and Gavin J. Grant have brought together 15 of the premier voices in speculative fiction to explore the intersection of fear and love – where the monsters within meet, and sometimes blur into, the monsters without – in a haunting, at times hilarious, darkly imaginative volume.” Narrated by Amy Rubinate and Nick Podehl. With stories by: M. T. Anderson, Paolo Bacigalupi, Nathan Ballingrud, Holly Black, Sarah Rees Brennan, Cassandra Clare, Nalo Hopkinson, Dylan Horrocks, Nik Houser, Kathleen Jennings, Alice Sola Kim, Joshua Lewis, Kelly Link, Patrick Ness, and G. Carl Purcell. More: reviewed positively by Kirkus; Grant interviewed at Tor.com. Get: [Audible]

Lastly: Egg & Spoon by Gregory Maguire, read by Michael Page for Candlewick on Brilliance Audio — “In this tour de force, master storyteller Gregory Maguire offers a dazzling novel for fantasy lovers of all ages. Elena Rudina lives in the impoverished Russian countryside. Her father has been dead for years. One of her brothers has been conscripted into the Tsar’s army, the other taken as a servant in the house of the local landowner. Her mother is dying, slowly, in their tiny cabin. And there is no food. But then a train arrives in the village, a train carrying untold wealth, a cornucopia of food, and a noble family destined to visit the Tsar in Saint Petersburg—a family that includes Ekaterina, a girl of Elena’s age. When the two girls’ lives collide, an adventure is set in motion, an escapade that includes mistaken identity, a monk locked in a tower, a prince traveling incognito, and—in a starring role only Gregory Maguire could have conjured—Baba Yaga, witch of Russian folklore, in her ambulatory house perched on chicken legs.” More: reviewed quite positively at Fantasy Literature. Get: [Downpour] 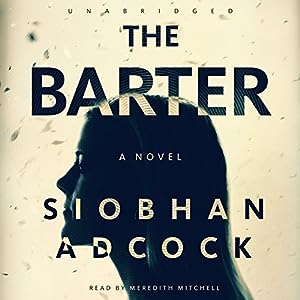 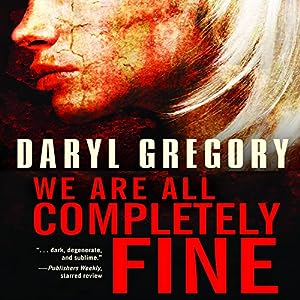