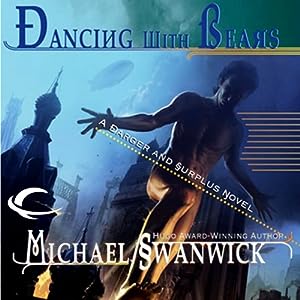 Dancing with Bears: A Darger and Surplus Novel
By Michael Swanwick
Narrated by Stefan Rudnicki

It’s a shame there are so few reviews of this 2012 audiobook of this 2011 novel, as this really was pretty fantastic. It’s like: Scott Lynch’s Locke Lamora meets Dostoevsky in the post-apocalypse. And as always Rudnicki is great; in this one he gets to show off a range of Russian accents, cyber wolves, giants, genetically engineered bear-men and Neanderthals, and a fascinating, hilarious pair of con artists in Darger (British, what ho) and Surplus (a genetically uplifted dog, from Vermont, yeah I said it, Vermont).

Hugo/Nebula/World Fantasy Award winner Swanwick has deployed these rogues in some short fiction prior to this, but there’s no required reading. (If you are so inclined, however, the first story, “The Dog Said Bow-Wow”, was a 2002 Hugo winner and has been heavily anthologised, and you can get the set of the first three stories in the 2007 Tachyon collection The Dog Said Bow-Wow; his 2014 story “Tawny Petticoats” is in the Dozois/GRRM anthology Rogues.) Swanwick is a legendary figure in the world of science fiction and fantasy: his 1991 science fiction novel Stations of the Tide won the Nebula, his 1993 novel The Iron Dragon’s Daughter was a 1994 World Fantasy Award nominee and was named a NY Times notable book, and he is one of the form’s living masters of short fiction,  with truly great stories from each of five decades: his two 1980 novelettes were both nominated for the Nebula, with stories appearing everywhere from New Dimensions to Omni and Asimov’s and all the rest, on through a fantastic and ongoing series of works at Tor.com of late, and! including an epic short-short fiction run from A-Z with his Puck Aleshire’s Abecedary in The New York Review of Science Fiction. (You are welcome to try to find the Dragon Press collection of these stories, because I have tried, and failed.)

When considering what books that one has missed over the years to belatedly pick up, so many things seem to need to come together, for that list is long enough to have no practical end. For myself, even enjoying Swanwick’s short fiction at Tor.com was not quite enough; especially when one has read precisely none of an every-award-winning author’s novels, it seems that (though it is of course not the case that) one must necessarily commit to a “deep dive” into everything before picking up the first. It wasn’t enough simply that Rudnicki, long long since my favorite narrator, was behind the microphone. It wasn’t enough that I’d been so strongly recommended various of Swanwick’s novels, time and again. It wasn’t even enough that this novel was praised (twice!) by Jeff VanderMeer, long someone in my personal “if they recommend it, pick it up” list.

Sometimes it comes down to the near-randomness that is a sequel, and a book tour, and as Swanwick was soon set to set out cross-country to support the release of the second Darger and Surplus novel, Chasing the Phoenix, it turned out that he’s coming to town, and would I be interested in interviewing him, etc. Well, of course, but first… let me do that “deep dive” thing. I finally started with Dancing with Bears.

So, the events. Something like this, prior to the book: In the future, we create AI, and have a utopia for a time (some dispute whether this utopia reached, say, Russia or not, and for how long); the AI… yeah it grew to hate humanity. Hate hate hate. War. Destruction. Some AI is eventually exiled to the Internet/virtual world, others are physically cut off. (For example, chiefly in this story, the Russian spaceport of Baikonur. Which hates you, people. HATES you. Biding its time. Hating you.)

And then, unto this comes Darger and Surplus, somehow before the story starts having talked themselves into the caravan of the ambassador of Byzantium heading to the Duke of Moscovy with a priceless gift. Crossing into Russia. Where Baikonur’s cyberwolves have just started their own journey.

So many cons ensue. There’s great world-building in Moscow, which has its own spiraling, interconnected, double-triple-quadruple-crossing schemes. Meanwhile, in this “post-utopian” time we have some gene-splicing, and automatic weapons, and really, really, really, REALLY crazy new drugs, but horse and carriage transport.

“In Russia, there are no facts. Only competing conspiracy theories.” (Paraphrase from memory one of MANY great one-liners liberally sprinkled in here on everything from politics to religion.) Just… highly recommended. Fun, smart, colorful, engaging. I really hope the forthcoming sequel comes to audio as well. Meanwhile, my personal “deep dive” into Swanwick continues with The Iron Dragon’s Daughter and Stations of the Tide and…

This entry was posted in reviews and tagged michael-swanwick, stefan rudnicki. Bookmark the permalink.