This is Not a Woman To Be Underestimated! The Tremontaine Listen-A-Long 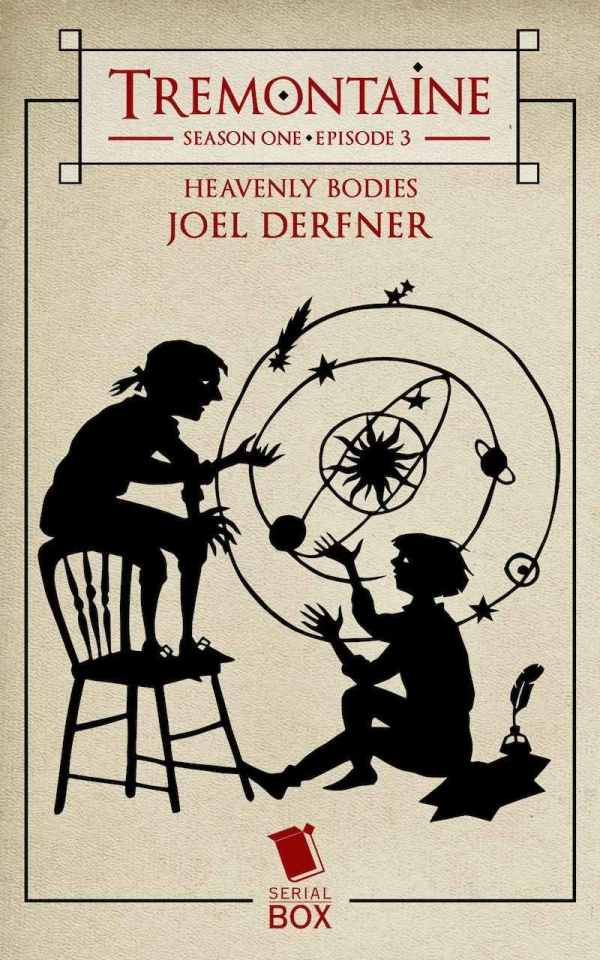 Last week Sam told me he’d been able to get around to listening to the Pilot episode of Tremontaine, and while he enjoyed it, suggested I maybe oversold the sex. (But not the chocolate!) And I suppose that he was right — the sex in the first episode (and last week’s) was insinuated. But “Heavenly Bodies” was such a delicious double-entendre, I think we all knew what we were getting into in Riverside this week, didn’t we? Yeah, this episode was hot, and promises more to come. Here there be little deaths! And not so little ones.

The episode starts off with the Duke of Tremontaine not noticing what the Duchess is wearing on her errand. This promises to have consequences for him in the future.

We jump to Rafe, who one week after his terse encounter with the Duke of Tremontaine wakes up in the room he shares after yet another one night stand, and is told by his roommate and one time lover Joshua that one day he’s going to want to spend a second night with a man, and when that day comes he won’t know what to do with himself. Those of us who remember  Soon afterward, Rafe realizes that his long-time dream of a school (for variables of a young scholar’s long-time anything) is probably shattered due to his arrogance, pride, and rudeness with the professors who will be grading him, and a vote essentially going against him. Crushed, Rafe runs out of class and ends up running right into the Duke of Tremontaine. Soon, Rafe is invited back to Tremontaine, and shares his dreams with the duke of his school. It isn’t long before the mixture of Rafe’s arrogance and idealism intoxicate the duke (call him William) and the two of them are kissing and moaning and doing all kinds of naughty things in the Tremontaine library. There was one point where Rafe is starting to play the angles, and imagining how if he plays the part of the innocent, Tremontaine will do whatever he wishes. And then William demands Rafe stop playing the part, and really gets under the scholar’s skin. It’s a nice bit of characterization, where we see Rafe lose control of the situation as well as his emotions and just become enthralled with desire, especially considering his earlier conversation with Joshua. Afterward, when Rafe discovers that Tremontaine’s vote helped destroy his academic future, we have a pretty strong suspicion that no matter how frustrated he is, Rafe will come back to Tremontaine House. (And guess what? Before the end of the episode, he does.)

While all that’s happening, Kaab insists on sitting in on a meeting between her uncle Chuleb and the Duchess of Tremontaine. When Chuleb refuses, Kaab decides to impersonate a servant and serve the chocolate herself, allowing her to eavesdrop on the whole conversation. We learn that Diane doesn’t take her chocolate like most of the Riverside gringos, and if she doesn’t actually like the spice when it’s uncut by cream, she does an excellent job pretending she does. This is not a woman to be underestimated, Kaab realizes. Diane and Chuleb talk politics and taxes, and seem to be considering an agreement that will be beneficial to both of them, but Diane is thrown off when Chuleb says he’ll need to get his wife’s input. Diane and Chuleb promise to meet again soon, and Diane returns to Tremontaine just as Rafe is stalking out of the house. Rafe has completely lost his shit at this point, and while Diane doesn’t seem surprised by her husband’s indiscretion, she does seem upset by his wishful ravings that Tremontaine will lose everything. Then she meets Benjamin Hawke, who presents the mysterious locket from last week’s episode, and is even more upset.

There’s a fun little segment when Kaab goes out hunting for Tess, and learns that she goes by “Tess the Hand.” Thinking Tess a prostitute, this leads to some amusing misinterpretations until she discovers that Tess actually does forgeries, and Ben is her protector. Kaab doesn’t find Tess, but she does eventually runs into Rafe and Micah, and gives up more information than she meant to about the celestial bodies and the way her people are able to navigate. When she realizes what she’s done, she seemingly convinces them that the planet is not a sphere, but an ellipsoid. Presumably, this will confuse and confound Rafe and Micah. Personally, I suspect it might confuse Rafe, but I’ve got too much faith in Micah to believe she’ll really fall for Kaab’s falsehood for long.

Finally, Diane returns to Tremontaine House, we learn that Diane has hired a swordsmen to subtly address a situation, seemingly in conjunction with receiving a letter from Chuleb. And soon afterward, a body is floating in the river.

So, whose body is it? While there seems to be some kind of connection to the letter Chuleb sent, my money is on Ben Hawke, Tess’s swordsman. It could be someone else, I suppose, but Ben did see Diane about the locket, and I suspect the locket caused Diane to have him killed. That’s just my thoughts, though. And I’m not at all sure how the locket connects to Chuleb’s trade, if it does at all. What do you all think?

For me, this was a pretty heavenly episode. And I’m not just talking about the  bodies! While it was light on the swordplay, it had all the political intrigue, manners, sex, double-crossing, violence, and chocolate we hope for in Riverside, and I find myself really warming to these characters. I will admit I was a little bit uncomfortable with the brief encounter between Rafe and Diane, and that he was able to stir such a reaction from her after all the build-up of Diane being so dangerous. I do like Rafe in general — probably because he’s an idealist at heart (albeit, a spoiled arrogant, and privileged one), but the way he’s reached out to Micah is affecting(although not for selfless reasons, but he seems to really care about her). And Micah I really like — perhaps because in a story that’s centered so much around manners and etiquette, her disability kind of prevents her from being able to play those games and be painfully, innocently honest. I’m looking forward to getting more of her story in the coming weeks. Kaab, of course, is great too. I think the authors have done a solid job creating some flawed, meaningful, and memorable characters.

It was nice to have Katherine Kellgren back to cover Diane’s brief interludes. Nick Sullivan did a fantastic job reading the sexiest scenes in the story thus far, and giving Rafe an insufferable, snide air that we just can’t get enough of. And Sarah Mallo-Christensen is doing outstanding work handling the segments from Kaab’s and Micah’s POVs.

Once again, I’m happy for my weekly jaunts to Riverside. How about you?

This entry was posted in reviews and tagged riverside, serial box, tremontaine. Bookmark the permalink.

One Response to This is Not a Woman To Be Underestimated! The Tremontaine Listen-A-Long